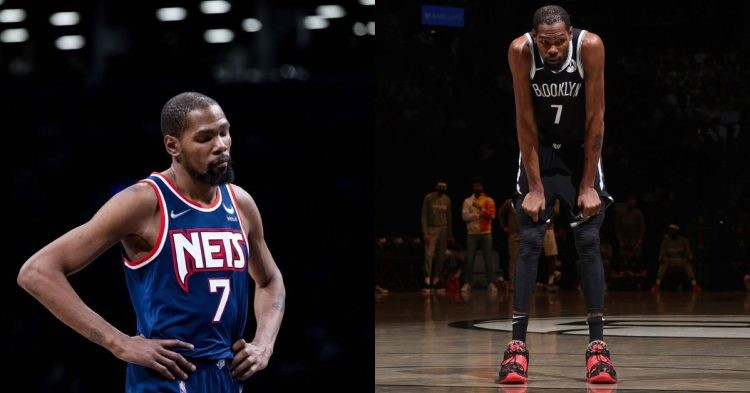 With the NBA season, draft, summer league, and even free agency now coming to an end, we have reached the least awaited part of the year. With considerable time left before the pre-season begins, we are in the ‘weird’ period where fans thirst for anyone type of drama. Kevin Durant and Kyrie Irving began to stir up rumors with some ‘waves in the still water’ with trade requests. But so far they have amounted to nothing.

Kevin Durant and Kyrie Irving left their championship teams to attempt to achieve something more important than a ring. A legacy. Both of them won titles with an asterisk. Kyrie was thought to be a ‘supporting star’ to LeBron. And KD‘s titles are seen to be ‘soft’ because of the team he was on. They joined Brooklyn in 2019 and the era is already come to an end turning into a resounding failure.

KD is available for trade and has been since 1st July. However, it’s been 20 days, and no trade or even great offers have been reported. Either the entire NBA does not want to change their franchise or Brooklyn is being too greedy and pricey.

If you are Brooklyn you would not want unhappy stars to be on your team with their trade value dropping every day they lose a game on their contract. But, reports have come out, portraying a different story. One that has started to make a lot more sense.

Kyrie Irving was the first to initiate this topic. He was threatening to leave the Nets for nothing by declining his player option. But once he started looking at the available market, he realized he will not be able to earn the money he was earning on another team. There were more rumors of a sign and trade but they were extinguished quickly as well.

Once Kevin Durant asked for a trade, the Nets were strong-armed into a forced rebuild which includes trading Irving to the limited pool of interested teams. Durant may have been doing this to help Irving or just did not want that energy on the roster anymore.

Either way, the rumors may have a ton of weightage considering how long it’s taking. These could just be speculations and Durant may even be traded in 10 minutes from now. But for now, that’s the narrative and NBA fans are waiting to see how true they are.