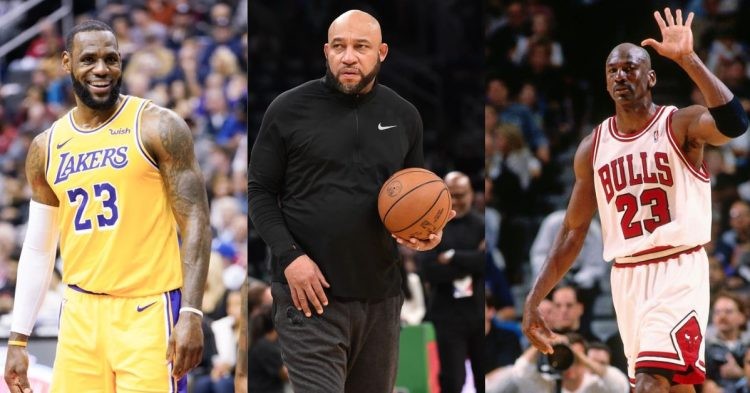 Darvin Ham is the new coach for LeBron James and the Los Angeles Lakers. He was appointed after the decision to fire their former coach Frank Vogel. He was fired because LeBron and the Lakers failed to make the NBA playoffs this year and were eliminated in the first round last year.

The Lakers have introduced new teammates and management this season to make up for what they were missing. Coach Ham was interviewed recently and he shared his opinion on the popular GOAT debate.

There are barely any NBA fans who do not know what the GOAT debate is all about. People have argued about whether Michael Jordan or LeBron James is the “real” Greatest Player Of All Time. Everyone is entitled to an opinion on this issue. However, it is still important to know where the Los Angeles Lakers coach stands on this issue. After all, he will be coaching one of the two GOATS this season for the first time in his life.

Darvin Ham claims LeBron James will be remembered as the GOAT

It is near impossible to take a black-and-white side on this debate. Michael Jordan played 15 seasons in the league, made 6 NBA Finals, and won 6 times. On the other hand, King James is entering Year 20, has made the NBA finals 10 times, and is a 4x NBA champion.

Those facts give Jordan supporters a case over LeBron. However, LeBron is simply a bigger, stronger, and more all-around gifted athlete compared to Jordan. Hence the debate seems never-ending.

Coach Ham revealed his thought process and why he concludes that King James is the GOAT, “You know Allen Iverson, Shaq, Kobe, and then it LeBron’s time. So he’s a once-in-a-lifetime type player that’s going to be mentioned with the greats and mentioned as the greatest you know what I’m saying.”

“LeBron James will be mentioned as the GOAT. He’s a once in a lifetime player”

He certainly makes a valid point. However, we shouldn’t be so quick to conclude that all this time has been “LeBron’s time“. Stephen Curry, Kevin Durant, Kawhi Leonard, and Giannis Antetokounmpo are a few of the players allowed to feel it is their time as well. Be that as it may, they are all far away from seriously being included in the conversation of GOAT.