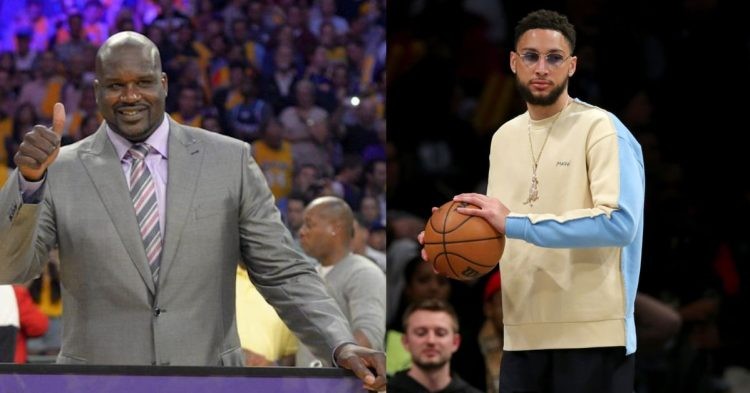 NBA legend Shaquille O’Neal was recently interviewed by an Australian media outlet called “7 News“. Some of us may already know that Brooklyn Nets star Ben Simmons is from Australia. He clearly has a fan base there, despite not having played this season. O’Neal was asked what he thought about Ben and his struggles so far.

We are all familiar with Simmons and his situation by now. He is a talented player with a polished handle and dribble. However, Ben has grown less and less comfortable with the jump shot as the years have gone on. This is quite a disaster as not knocking down open shots makes you a liability at the NBA level.

No one exactly knows what Simmons is going through and can only speculate. Shaq briefly explained what Ben Simmons needs to go through in order to get to the next level.

Shaq as an entertainer and host is quite a real person. He usually does not hold back or mince his words when criticizing superstars for their play. However, Ben has cited mental\psychological problems for being unable to perform. Thus, O’Neal did not attack or mock him. Instead, he simply stated the obvious.

Basketball, especially at the NBA level, is all about being “adaptable” and “fitting into the system” as a roleplayer. These are all vague unclear concepts to professional athletes. Simply speaking, Simmons should forget the past and learn to fit into the new system of the Brooklyn Nets.

Kyrie Irving and Kevin Durant will dominate the majority of shots taken. Therefore, there is no real pressure to overcome this obstacle immediately. Nonetheless, as Shaq says, every NBA player should want to get to the next level and that takes mental fortitude.

The world has clearly doubted Ben’s play and mental fortitude over the past few seasons. It is about time he stopped running from the situation and just played through whatever he is going through.