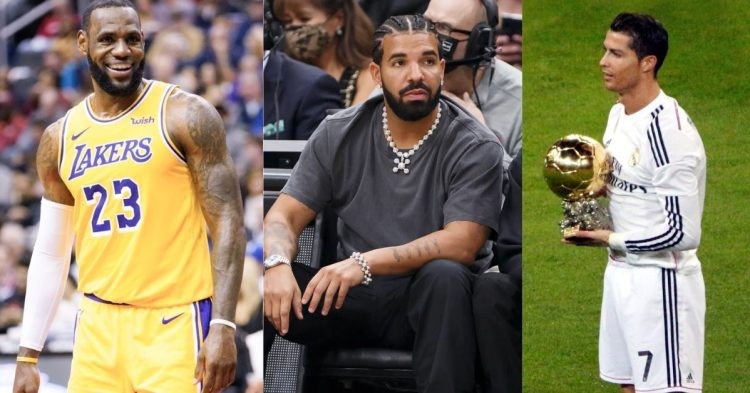 Drake was once asked to compare LeBron James and Cristiano Ronaldo. Sports fans will definitely have heard of both of these athletes. One could argue that they are the faces of Basketball and Football (Soccer). Both of these are very different sports and it is quite difficult to compare them objectively.

In any case, Drake was asked to do so and ended up defending his choice. While this is clearly just his opinion, fans might still be interested in which superstar athlete he ended up choosing.

Athleticism is a characteristic that any superior athlete displays when performing well at the highest level. Whether it is sprinting, gymnastics, or any sport, it is a commonly used term. As we all know, both basketball and football are two sports that heavily rely on athletic and agile acts. LeBron James and Cristiano Ronaldo have been hailed as the most athletic in their respective sports.


When Drake was asked, he gave out a balanced response supporting the cases for both players. Nonetheless, the gist of his message ended up revealing that he felt Ronaldo has an advantage over LeBron.

“LeBron James is like a powerhouse in his field which is like basketball. Cristiano Ronaldo, he’s like an assassin. The work he does on that field is surreal. So I think athleticism is superior in soccer. I just think it takes.. If you’ve ever been on that field to know what it is to run up and down and then not only that, how aggressive it is. Not to say basketball isn’t aggressive but soccer is like a very dangerous game. There’s a lot of body play…I just think that soccer is a way harder game to play.”


There is no arguing that players will have to be in far better shape in order to play football when compared to basketball. After all, NBA players play a maximum of 40 minutes divided by 4 quarters. On the other hand, football players play two 45-minute halves.

Drake must have realized he’s going a little bit too far against LeBron James, something that the King’s fans would certainly have a problem with. Therefore, he concluded on a positive note about the NBA star.

“But with that being said, LeBron James is like probably like…he’s like not even human so I mean it’s tough to really compare the two.”


Both LeBron and Cristiano are capable of running very fast and jumping high. However, it is unfair to compare them when each sport required a different ratio of skill and athleticism. Ronaldo weaving past defenders to get open and scoring shouldn’t really be compared to LeBron James dunking on three people. Stamina is certainly one component of athleticism and CR7 definitely has the King beat in that domain.