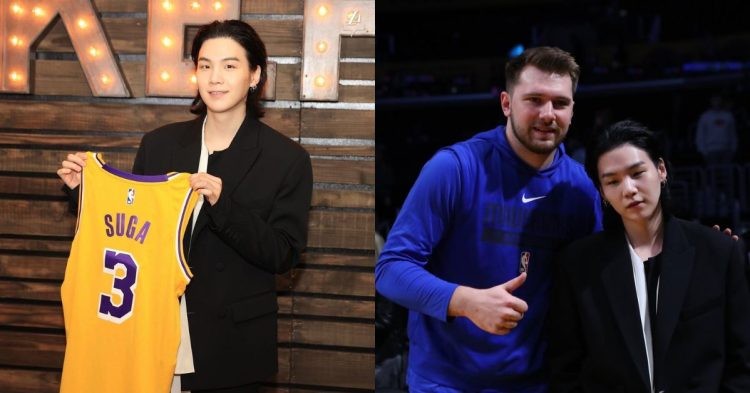 The Los Angeles Lakers hosted the Dallas Mavericks in the NBA at the Crypto.com Arena. The game between the two teams was exciting and end to end, and had 2 overtime to decide the winner. The Lakers have many celebrity fans and over the years big actors and rappers attend the game, from Snoop Dogg to Leonardo DiCaprio to the Lakers’ biggest fan Jack Nicholson.

Last night, one of the biggest K-pop bands BTS star, Suga was in attendance for the Lakers-Mavericks game. The K-pop star is a huge basketball fan and doesn’t keep it a secret. In the BTS’s hit  “Dynamite“, he played basketball in the video and sported a “Tune Squad” jersey from the Space Jam franchise.

“Jump up to the top, LeBron.” pic.twitter.com/FvNXgIq2EF

All we need is a photo with him and LeBron!!

Suga from bts is at the lakers game hehe 😁 pic.twitter.com/ijkxyiDQmd

Last night before the game the Lakers gave him a customized jersey with his name on it. They posted photos of Suga captioned the post, “Jump up to the top, LeBron.” For context, the caption is from a line in the song, “Dynamite“. He is a huge fan of the Laker’s forward LeBron James. In fact, his name translates to ‘Shooting Guard’ in English.

From one star to another! ⭐ #SUGA of @BTS_twt and Luka Doncic of the @dallasmavs meet up before tonight’s game!

Even though he was holding a Lakers jersey before the game, he had the chance to meet the Mavericks’ star man Luka Doncic. During The Mavs pregame practice, Suga clicked a photo with the Slovenian.

This is not the first jersey he received from a team throughout the years. The Golden State Warriors were in Japan for a pre-season game and received Stephen Curry’s no. 30 jersey. He had the opportunity to meet the splash brother, Stephen Curry and Klay Thompson.

Which is Suga’s favorite team?

The BTS rapper has been spotted wearing NBA jerseys on multiple occasions. He has worn the White Chicago Bulls Jersey in a music concert. He is seen wearing jerseys of the Philadelphia 76ers on one occasion, and wearing the New York Knicks jersey in “DNA” MV. One might think the 29-year-old is a Lakers fan after rooting for them last night. Or a Doncic and the Dallas Mavericks fan. Neither of them is the rapper’s favorite team.

In an interview with Vogue Korea in 2021, Suga revealed his favorite team, “The Portland Trail Blazers. I prefer the underdogs to the big teams.” He also revealed that his favorite player in the NBA is none other than Damian Lillard.

The Trail Blazers guard, Lillard was touched by his words. The point guard showed his appreciation by posting a video message for the BTS rapper.