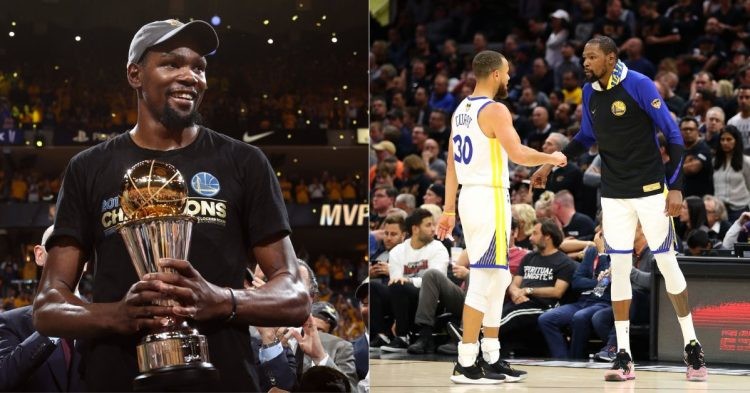 There is no doubt that Kevin Durant is one of the most successful players of this generation. He has been at the top for more than a decade now since being drafted in 2007. The Brooklyn Nets star has featured for the best franchises in the league as he paved his path to make the HOF list.

There were even fans saying that Durant’s legacy had ended following GSW’s recent triumph. KD was known to be one of the dominant forces of the Warriors super-team that every team in the league feared. Haters and critics of KD are now mentioning that the Warriors didn’t need him to win the title. Moreover, he has been to the finals too many times for haters to invalidate his achievements in the game. Let’s take a look at how many times he has played in the finals.

Kevin Durant has been to the NBA Finals 4 times in his career. While three of those appearances came with the Golden State Warriors, he also made it to the NBA finals once with the Oklahoma City Thunder.

KD’s reached the Finals for the first time in the 2011-12 season with OKC. He was up against LeBron James’ mighty Miami Heat. If either of the players won, it would be their first-ever NBA Championship. It almost seems like the one to get ahead of the other first would go on to have a better career. This is obvious considering how their careers turned out to be till the present day.

The Miami Heat took the title home after beating the Thunder 4-1 in the series. LeBron made a name for himself after putting up incredible numbers. He averaged 28.6 points, 10.2 rebounds, and 7.4 assists in the 2012 NBA Finals. Despite losing, KD should’ve felt proud of himself. He managed to put up 30.6 points on average in those five games against the Heat, which is no ordinary feat.

The current Nets star helped the Warriors reach the Finals in 2016-17. They played against LeBron’s Cleveland Cavaliers. It seemed like KD could get his revenge against LeBron at the time.

Eventually, it turned out to be Durant’s perfect revenge plan. He guided the Warriors to a title win, making it his first as well. With that, he also brought home the MVP trophy after his exceptional performances. He put up 35.2 points, 8.2 rebounds, and 5.4 assists as averages in the finals to help his team win.

KD led the Warriors with Steph Curry, Klay Thompson & Draymond Green. It is a common opinion that almost no one could stop this team. They had made it to the Finals for the second year running, where the Cavs were hoping to break their hearts.

Kevin Durant in Game 3 of the 2018 NBA Finals is basketball brilliance, skill and clutch at a 100 overall. pic.twitter.com/2SdHkW0Ks7

However, it turned out to be the other way round. The Warriors completely swept the Cavs in a 4-0 series as they took home the title. Durant was once again the best player in the Finals as he won Finals MVP two times in a row.

After helping the Warriors build a dynasty, it seems like KD wanted more. Together with his legendary teammates, he helped The Bay reach the finals once again in the 2018-19 season. Take a look at his best plays in the Finals here.

This time around, the Warriors did not have the same type of success they had in the past. The Toronto Raptors shocked them in the finals with their resilient and never give up attitude. The Raptors took home the title after beating the Warriors 4-2.

Although he has his issues off the court, there is no doubt that he gave his all for every team he played for. That is including the Brooklyn Nets, despite all the drama that is going on. Durant will eventually go on to become one of the players to grace the game.