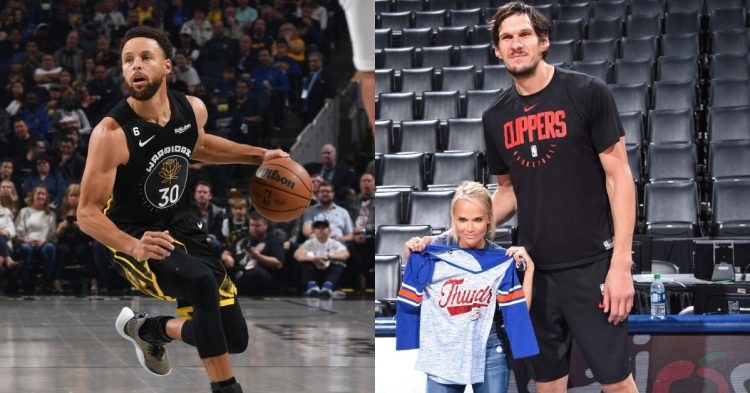 Stephen Curry has achieved everything that there is to achieve on an NBA court. He has won 4 championships, 2 MVPs, and 1 Finals MVP. Apart from this, he is also the NBA’s all-time leader in three-pointers made. Curry has a legacy that will be left untouched for a long time after he decides to hang up his boots. The best part about all of this is that he has achieved these things despite being undersized. He might not be getting any taller but he is getting better with age.

Steph is only 6’2 which is way below the league average. In a league dominated by giants such as Giannis, Kevin Durant, and LeBron James, Steph has made a name for himself by relying on his technical attributes instead of his physical attributes.

The craziest part is that Steph is the shortest player on his team. The only players on the Warriors that are even close to Steph Curry’s height are Donte Divincenzo at 6’4 and Ryan Rollins at 6’3. The rest of the Warriors are all 6’5 and above with James Wiseman being the tallest at 7’0.

Who is the tallest active NBA player?

In a league of giants, some stand above everyone else. First, there used to be the physical anomaly that was Yao Ming who stood well over the NBA at 7’6. Currently, the tallest player in the NBA is Boban Marjanovic at 7’3. Kristaps Porzingis is a close second on the list.

21-year-old Bol Bol is one of the tallest active NBA Players at 7 feet 2 inches.

He plays for the Denver Nuggets.

He is the son of the joint tallest NBA Player of All Time, Manute Bol from South Sudan. pic.twitter.com/MeGUJpvL6O

Another player that is a part of the tallest active NBA players list is Bol Bol who is the son of NBA legend Manute Bol who towered over everyone else at 7’7.  Bol Bol on the other hand doesn’t have his dad’s height and stands at 7’2.

Height is an important factor in the NBA, but something more important than being tall is having a lot of skill and determination.

Stephen Curry is living proof of the fact that you can make it very far in the NBA world as long as you are willing to constantly work on yourself. Isiah Thomas is another example of a short player who has dominated the NBA.