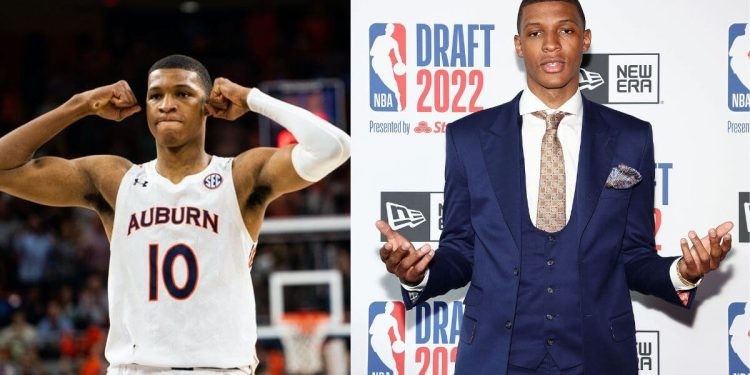 Jabari Smith Jr and Chet Holmgren were favored to be the top picks of the 2022 NBA Draft. The Orlando Magic and the Oklahoma City Thunder were the teams with the top 2 picks respectively. There were several reports indicating that Jabari and the Magic were interested in each other. However, in a stunning change of events, he ended up being the third pick with the Houston Rockets.

“I’m just happy to be where I wanted. Ready to get in there and show them they made the right decision.”@jabarismithjr speaks with @TaylorRooks after going No. 3 to Houston. #NBADraft pic.twitter.com/JmKSCCgEGs

It must be truly aggravating to assume one is going to be placed first, or at the very least second. Only to find out that one finished in the third position. This is what happened to Jabari Smith Jr. NBA fans must be wondering how this twist in events came to be.

The Houston Rockets got Jabari Smith Jr thanks to Paolo Banchero

The Rockets were initially positioned to choose Paolo Banchero with their third pick in the first round of the 2022 NBA Draft. He was considered a close third in the race for the 1st Draft pick between Chet Holmgren and Jabari Smith Jr.

However, he won over the minds of the Orlando Magic. They decided to believe in Banchero and chose him instead for the first spot in the draft.

“I’m just happy to be where I wanted. Ready to get in there and show them they made the right decision.”@jabarismithjr speaks with @TaylorRooks after going No. 3 to Houston. #NBADraft pic.twitter.com/JmKSCCgEGs

The ensuing chaos as the teams now scurried to change their orders and decide a new draft pick was powerful. However, Chet Holmgren was selected second by the Oklahoma City Thunder. He had already gone to workouts with them and had expressed a desire to play there, fit in their system with Shai and the other Thunder players.

This led to the Houston Rockets now jumping at the offer to get a player higher ranked than the one they were preparing for. The Rockets were probably going to sign Banchero themselves in the third position. However, they now had the option to get Jabari and instantly took it.

This is an interesting situation\dynamic in the NBA. One must wonder whether Jabari holds any ill will towards the Magic for passing up on him at the last moment. Moreover, the greater question is whether he will still give his all and put in his best effort. It is never easy to deal with being “passed up and traded down“.

This is probably what Jabari should be feeling after having set high expectations for himself. Thankfully, neither the Rockets nor the Magic is particularly better than each other. Both players who have seemed to switch spots in the draft will have their work cut out for them regardless