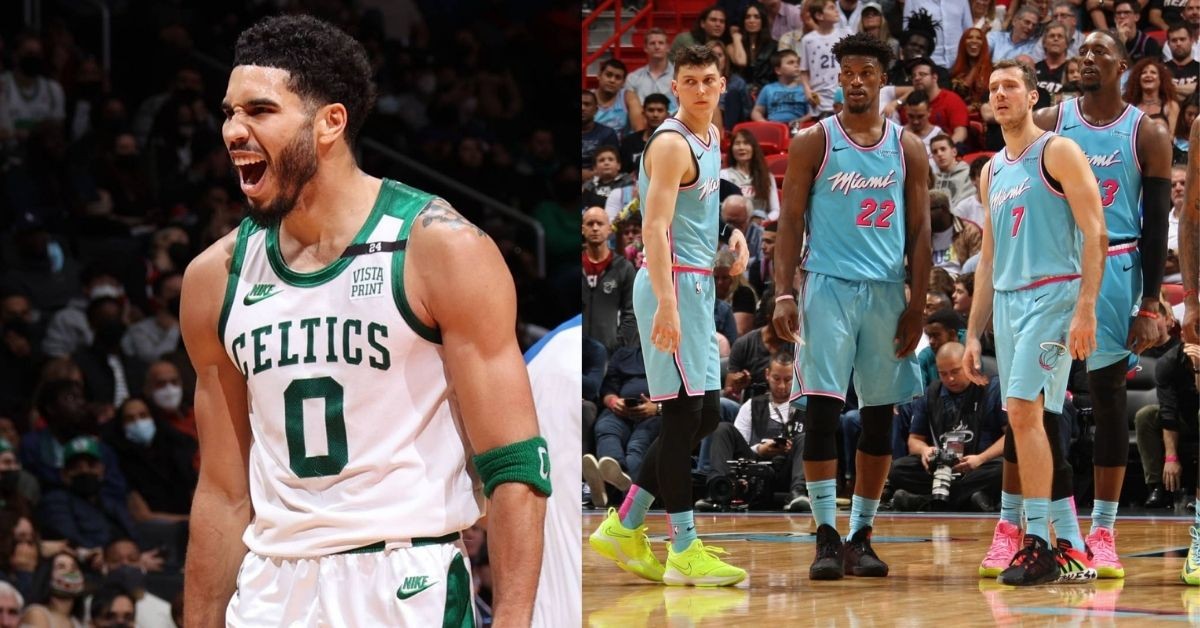 Jayson Tatum and the Boston Celtics face the Miami Heat in the Eastern Conference Finals. He has ascended and proved he is a superstar this season. Jason Tatum averaged almost 27 points, 8 rebounds, 4.5 assists, and 1 steal. He made 45% of his total shots and 35% of his 3-point attempts.

The Miami Heat are no joke and finished this season as the top team in the Eastern Conference. They eliminated Trae Young and the Hawks, then moved on to eliminate Joel Embiid and the 76ers.

Jayson Tatum vs The Miami Heat in regular season

An NBA series is decided by the star power on each team. Therefore, Jayson Tatum’s and Jaylen Brown‘s play will decide how far the Boston Celtics go this postseason. However, this is not always the case. It is definitely possible for a team to win games even when star players underperform.

The Boston Celtics and The Miami Heat have faced off thrice this regular season. The Celtics won 2 out of those 3 games. Additionally, both these games were blowout wins.

Tatum had only 10 points 8 rebounds and 2 assists in their first matchup in November. However, the Celtics managed to crush the Heat and win the game 95-78.

These teams faced again in February. The Celtics would have another dominant victory. Tatum played better in this game. He had 20 points 12 rebounds and 5 assists. Therefore, the Celtics won 122-92. A whopping 30 points.

The Heat managed to get revenge for this and won their final matchup at the end of March. This was despite Tatum scoring 23 points, 5 rebounds, and 6 assists. The final score was 98-106.

Boston Celtics are heavily reliant on their stars

Jayson was responsible for the Celtics stopping Kevin Durant and Giannis Antetokounmpo. Jaylen Brown also stepped up in pivotal games. Having two powerful large two-way guards in Tatum and Brown gives the Celtics a good chance to win it all.

Tatum has been averaging 28 points in the postseason so far. He has had nights where he seems simply unstoppable. However, he has also had games where he has struggled to find his rhythm offensively.

The Boston Celtics and Miami Heat faced off for game 1 of the Eastern Conference Finals. Tatum had 29 points, 8 rebounds, and 6 assists. However, the Celtics lost to the Heat 107-118.

Jayson has had comparatively “off” games when facing the Heat in the regular season. He cannot afford to have these games anymore. Tatum will have to play excellent basketball to steal game 2 from the Heat on the road.