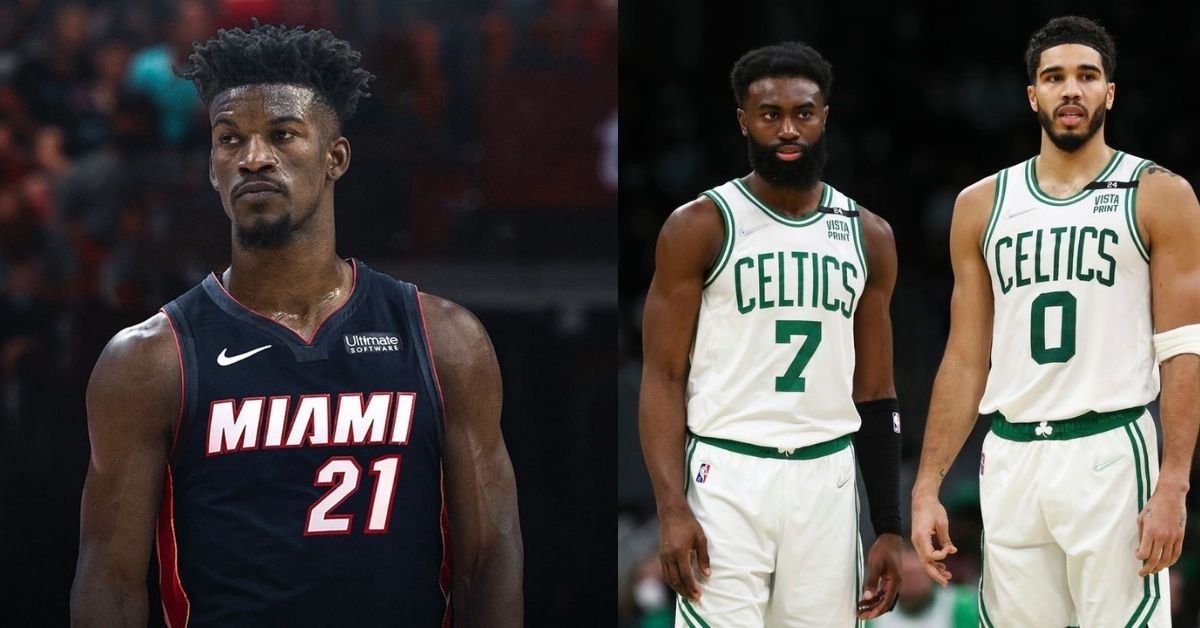 Jimmy Butler and the Miami Heat are 4 wins away from the NBA Finals. They face the Boston Celtics in the Eastern Conference Finals. Jimmy has averaged 21.4 points, 6 rebounds, and 5.5 assists this season. He helped carry the Heat to the top seed in the East.

Jimmy and the Heat must be in a state of De Ja Vu. They faced the Boston Celtics in the Conference Finals in 2020. Back then, The Miami Heat managed to win the series in 6 games. By doing so they advanced to the NBA Finals.

The situation is exactly identical in terms of which team he is facing and when. But how has Jimmy Butler performed against the Boston Celtics this season?.

The Heat and the Celtics have matched up thrice this season. Boston won 2 out of these 3 matchups. However, the Heat still finished this season with the best record in the East. By doing so they have secured home-court advantage.

The Heat and Celtics first matched up in November. Jimmy scored only 20 points 4 rebounds and 2 assists. Therefore The Miami Heat lost that game 78-95.

Butler did not play in their second matchup due to his injuries. The Celtics crushed the Heat in this game and won 122-92. In their final matchup this season, the Heat won 106-98. Jimmy Butler had 24 points, while Kyle Lowry had 23 to carry the Heat to this victory.

Jimmy Butler is not the sole superstar on the Miami Heat. Their roster is full of players whom he would define as “dawgs“. However “playoff Jimmy” is another animal.

Butler has always elevated his game in the postseason. He has carried every franchise he has been with, further than it had been. This list includes the Bulls, Timberwolves, and 76ers. None of these teams have performed better after he left or was traded.

“Playoff-Jimmy” is unstoppable for the Miami Heat

In this postseason, Butler is averaging 28.7 points, 7.6 rebounds, and 5.4 assists. Additionally, he is averaging 2.1 steals as well. These numbers are a huge leap from the regular season.

The Miami Heat will need “Playoff -Jimmy” to be at his best to knock out the Boston Celtics for the second time in three years and make the NBA Finals.

Jimmy Butler had a monster game 1 vs the Boston Celtics. He had 41 points, 9 rebounds, and 5 assists. Therefore, the Miami Heat were able to win this game 118-107