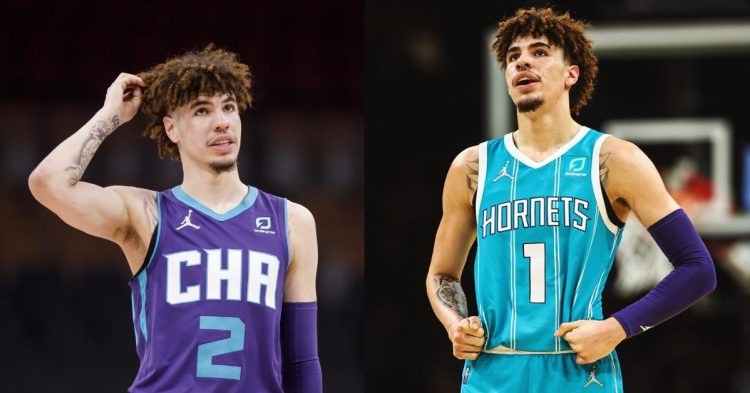 LaMelo Ball is the All-Star player for the Charlotte Hornets. They drafted him at no.3 at the 2020 NBA Draft. Since then, he has been their standout player. He helped the team finish at 10th in the Eastern Conference standings in the 2021-22 season. They made it to the Play-In Tournament, before falling apart to the Atlanta Hawks in a 132-103 loss.

Charlotte Hornets All-Star LaMelo Ball is officially changing his jersey number from No. 2 to No. 1 for next season, sources tell @TheAthletic @Stadium. pic.twitter.com/aR9GbWXqte

Since his NBA debut, LaMelo has been wearing the number 2 jersey for the Hornets. When he joined, Malik Monk kept no.1 for himself. That was the first time for LaMelo to wear a different number other than 1, which he wore for every team in his career.

LaMelo has finally managed to change his jersey number after two years. After the decision, he said, “I ain’t supposed to wear No. 2 ever again in my life. I promise you. If I see a No. 2 I don’t know what I’m going to do.”

LaMelo Ball told us during exit interviews in April his jersey change from No. 2 to No. 1 should be official for the upcoming season. Now it is.

“I ain’t supposed to wear No. 2 ever again in my life. I promise you. If I see a No. 2 I don’t know what I’m going to do.”@MELOD1P pic.twitter.com/lVPfmU9afY

That’s not all the Hornets star said. He also mentioned, “It don’t feel like you’re playing for real,”. We can probably agree with him on the statement. Jersey numbers have always been special to NBA players. The wrong number can make you feel different and as if you’re outside your comfort zone. That’s the last thing any athlete would want.

This wasn’t the first time Ball has expressed his desire to change numbers. Last year, the American tried to switch to no.1 after Monk departed. However, Ball missed the deadline and had to wait another year for his wish to come true.

“Definitely just want to be me out there & just playing in No. 2 don’t feel right.” – LaMelo Ball on why he wants to switch to No. 1@MELOD1P | #Hornets | #NBA pic.twitter.com/vs8QrB5jsq

Is LaMelo keeping the number 2 free for his brother Lonzo?

After the jersey change this year, Ball also claimed, “I don’t know who this is, I don’t know who No. 2 is, I only know my brother, that’s it.” His brother, Lonzo Ball, has always worn the number 2 during his basketball career. Does his number change suggest that he’s making way for his older brother to come to join the Hornets? That could be possible since there were significant rumors of Lonzo joining Melo.

Similarly, another one of Melo’s older brothers, LiAngelo also wears the number 3 for the Hornets. Two of the Ball brothers are on the same team with jersey numbers 1 and 3. Is it time for Lonzo to join? To be honest, their father, LaVar Ball has expressed his desire to make his sons play on the same team.

On the All Things Covered with Patrick Peterson and Bryant McFadden podcast, he mentioned that Michael Jordan’s Hornets could win the title. He said, ” If all three of my boys get over there, Mike got a chance. If Mike do the right thing, and don’t let folks get in his head and say, ‘You know what let me go get all three of them boys’. Get all three of them, I guarantee they win a championship.”