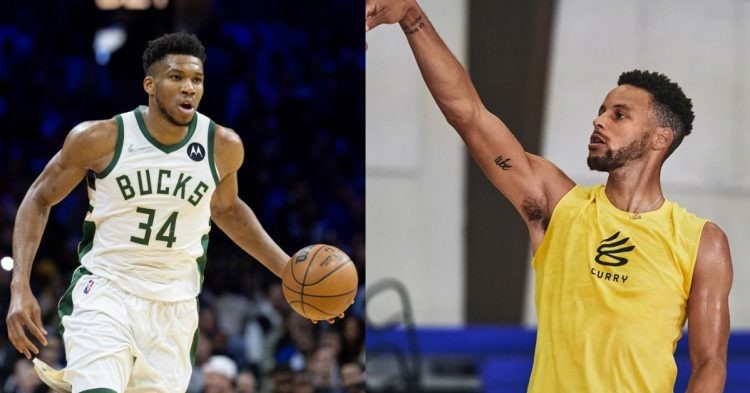 Giannis Antetokounmpo of the Milwaukee Bucks and Stephen Curry from the Golden State Warriors are the last two NBA Finals MVPs. They managed to carry their respective teams to an NBA title through much adversity and doubt from the world. Moreover, both NBA stars have an incredible sense of mutual respect for each other.

It would be no exaggeration to say that Curry’s and Antetounmpo’s style of play would create a lot of respect from admires and each other. When The Golden State Warriors won the NBA title this year, the Greek Freak had high praise for the baby-faced assassin.

There is no malice or being fake here between the two players. Thus, we should wonder what Giannis Antetokounmpo said and how Stephen Curry responded

One could argue that there is no higher compliment to give a player. We all know Giannis Antetokounmpo already claimed that both LeBron James and Kevin Durant are the best players he has seen. Now we know he has included Stephen Curry in the conversation.

From a logical perspective, Giannis and Steph are the best players in the league as they were both the last NBA Finals MVPs. However, ESPN and other NBA rankings consider Antetokounmpo to be a much better player than Curry. Nonetheless, Giannis praising Steph was well received by the 2022 NBA Finals MVP.

“Thank you Giannis, I don’t know if it’s gamesmanship to set the table. I always say the same thing when you face champions, that’s part of the nature of the league. We all want to win the championship and we look at the team, that’s the last team standing, who’s playing the best”.

Steph went on to humorously explain that sweet talking and compliments wouldn’t work on him, “ I was thinking the same thing of him last year coming off their run. I appreciate the compliment. its not going to soften me up and get complacent at all. But, I do appreciate the respect of peers to go out and say something like that.”

This is quite a well-balanced and thought-out response from Steph. He is grateful for the acknowledgment but also knows how he should be careful what to say in today’s world. The last thing he needs is for the media to say that he “wants” Giannis to play with the Golden State Warriors.
Tags: Giannis AntetokounmpoNBAStephen Curry
Previous Post