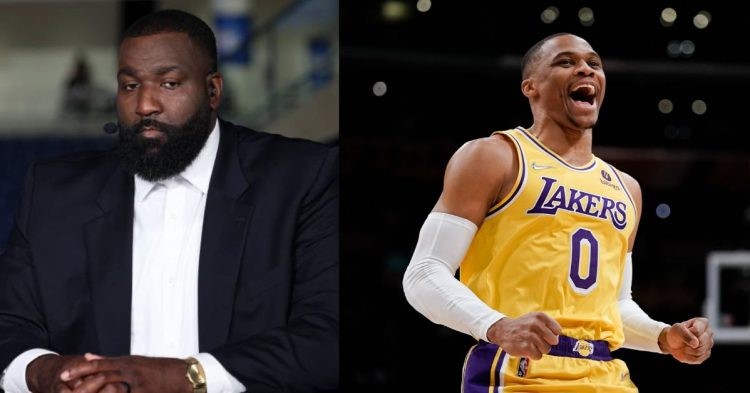 The LA Lakers have been in the headlines for a while now. They are one of the teams that have constantly ended up in the middle of trade rumors. The main reasons for this would be Russell Westbrook and Kyrie Irving. The two players have got the trade market going with the number of teams looking to acquire them.

It’s not like they’re looking to stay with their current teams as well. Kyrie has been clear about wanting out of Brooklyn Nets for a while now. Especially after that never-ending drama with the organization about him not getting vaccinated.

He tried to find a team that wanted him all summer but ended up opting in for a final year with the Nets. But once Kevin Durant revealed he wanted to leave, Kyrie decided it was time for him to go as well.

Recently, Kendrick Perkins gave out a bold statement about the situation involving Russ and Kyrie. In the past, he has also said he believes Kevin Durant is only wanting out from Brooklyn to scare the Nets. This time around, Perkins is of the idea that Westbrook wants to leave the Lakers because he knows they are trying to offload him in a Kyrie Irving trade.

Kendrick Perkins mentioned, “I applaud Russell Westbrook because if I knew that the organization that I was signed to right now, is trying to actively trade me for Kyrie Irving, there’s no way in hell I’m even around any one of them.” What KP said actually makes sense if you think about it. It is highly likely that Russ read about the rumors surrounding him and Kyrie. Especially after Kyrie teased the move when he went to LA.

Russ has been doing his part to tease the move as well. Recently, fans spotted him at a Lakers summer league game with LeBron James. The only issue with that was that he did not sit with or speak to LeBron. Does that mean there is a rift between the two players? Only they would know if we’re being honest.

Perkins also mentioned, “Here’s the thing, Russ actually wants out because he know the Lakers want Kyrie Irving, and we all know the Lakers want Russ out.” All things considered, many wouldn’t be mad if Russ wanted to leave. There is no doubt that his move to LA hasn’t worked out for him. It would probably be for the best that he tries to leave. The Lakers would be looking to use it to their advantage by involving him to go for Irving.