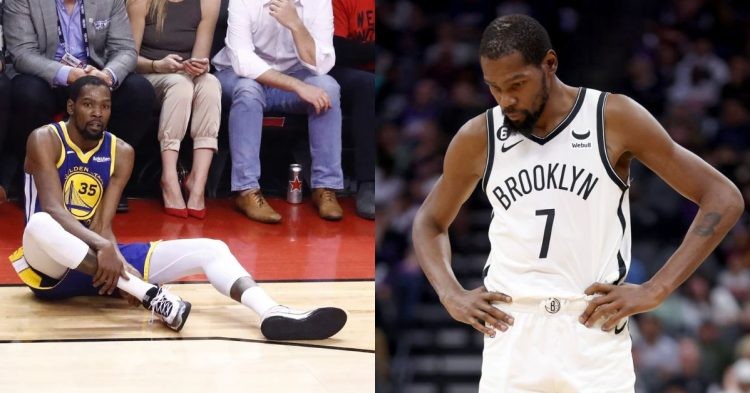 Kevin Durant has been one of the greatest NBA players of our generation. He has managed to stay at the top of his game over the years. Even though Durant only managed to win 2 NBA championships, he has still had a legendary career. And the best part is that at 34 years old, he is still one of the best players in the league.

As we all know, the Brooklyn Nets have been having quite a disappointing season so far. In the 2022-23 NBA season, they have won only 6 out of 15 NBA games till now. In a struggling team, KD has been the best of the lot. He has averaged a whopping 30.3 points per game this year, together with 6.5 rebounds and 5.3 assists.

KD’s numbers might suggest that he is having the time of his life on the court. He has not been able to lead the Nets franchise to wins this season. If we’re being honest, his career will come to an end in the coming years, considering his age. And we have to understand that KD isn’t the same player he once was back in his Golden State Warriors or Oklahoma City Thunder days, even if his numbers say otherwise.

Recently, the player himself admitted that there was an instance in the past when he was unsure of whether he would play in the NBA ever again.

In an interview with Bleacher Report, the Nets star said, “I’m really having a good time. I wish y’all could hear me talk during the game. If I got mic’d up more, people would stop asking me if I’m happy or not. I’m enjoying every moment I get to step on this f–king court, and part of it is because I tore my Achilles. And the pandemic, I didn’t know if we were going to play again. I didn’t know if I was going to play again.”

For the fans that don’t know, Durant faced a horrible injury in June 2019. When he was playing for the Warriors that year, he faced the Toronto Raptors in Game 5 of the 2019 NBA Finals. During that game, Durant tore his right Achilles tendon when he was trying to dribble past his opponent. It was one of the worst injuries any NBA player can possibly face during his career.

An interesting fact was that KD played in that game with another injury as well. He had strained his calf ahead of the game and had to miss the Western Conference Semifinals earlier. The Warriors managed to crawl to the finish line and won the game against the Raptors by just one point that night (106-105). After the game, Durant tweeted to let the world know that he was ecstatic about the win.

In his recent interview, he mentions that the COVID-19 pandemic was also one of the reasons that caused uncertainty in his career. For context, the Achilles tear kept him on the sidelines for the whole of the 2019-20 NBA season. In June 2019, he joined the Nets, just a few months before the COVID-19 disease shook the entire world. All the sporting activities were suspended.

Just like everyone else, Durant had to watch from afar, as the NBA decided to go ahead but with safety protocols. It seems like this had created a sense of doubt for the player. He was unsure whether he would return to the court, mainly due to his serious injury, and the fact that the league was suspended. However, he did return to the court, in December 2020, more than 500 days later.

It will be safe for us to assume that he has his retirement plans in his mind. At his age, Kevin Durant only has a few years left in the tank, which he admits. The fact that he claimed that he tries to enjoy every moment shows that the injury and the pandemic helped him realize that he has to be grateful.