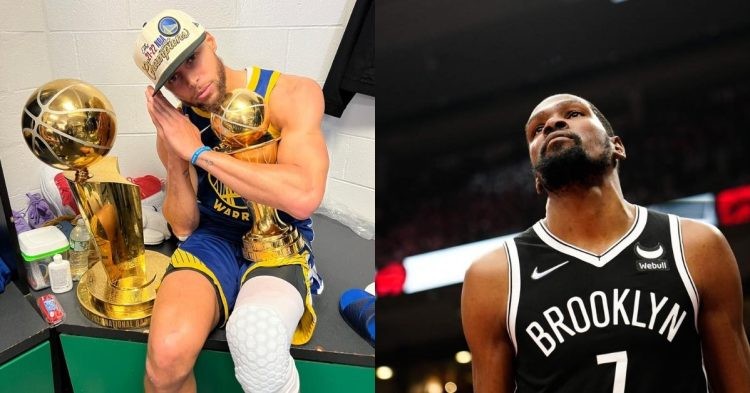 Kevin Durant and Stephen Curry joined forces and made the 2017-18 Warriors one of the greatest teams we have ever seen. They won back-to-back championships and had the league wrapped around their fingers during their stint together.

Me and @KDTrey5 discuss

A lot of people have been saying that Kevin Durant is jealous of Stephen Curry. He recently addressed these claims and gave his perspective while on The ETC podcast.

KD may have differences with Draymond Green but one warrior that he never speaks ill of is Stephen Curry. Recently in an interview, Durant had some high praise for The Chef and even went on to address the jealousy claims that people have been putting on him.

“This is one of the greatest we have ever seen,” “He made it fun for everybody with the shots he was making and the way he led them,” said KD when asked about playing with Stephen Curry.

“I played there for 3 years, if you didn’t see the jealousy on the court, and in the media then why are you trying to make it up now?” That is what KD had to say to the people who claim that he is jealous of Steph. “I don’t compete with my teammates on the court,” KD went on to explain there is no competitiveness of any kind between the two. “How can I be jealous when I’m sitting there in the corner passing to these dudes,” Durant solidified his statement by pointing out that Steph and Klay both broke the 3-point record when he was on the team.

Let’s not forget that he’s a big part of this Warriors dynasty, and that there’s no need to go at him. @KDTrey5 pic.twitter.com/6TFmjpbb9i

KD has never won without Steph and that is a statement that will forever be used when people discuss his legacy. But all of that is more for debate, at the end of the day it all comes down to what players do on the court, and Kevin Durant is one of the greatest at what he does on the court.