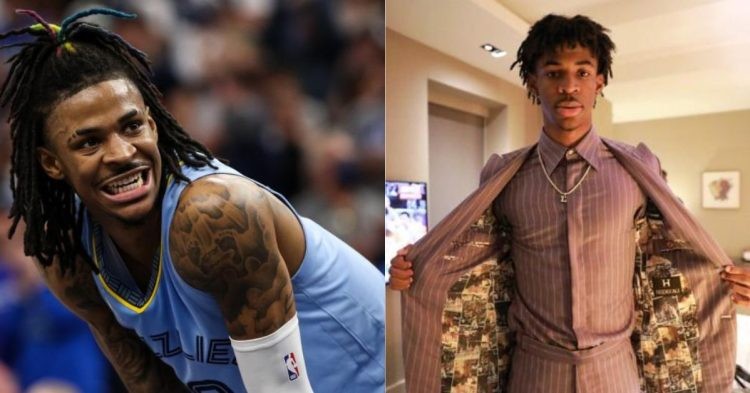 Ja Morant on the court and in a suit (Credit- Twitter)

Ja Morant is the young star point guard for the Memphis Grizzlies. He has quickly made a name for himself as one of the best young talents in the league. His team instantly jumped into relevance as soon as his career there began. Morant won the “Rookie Of The Year” award after being drafted in 2019. Additionally, he won the “Most Improved Player” award this year.

The Grizzlies are a franchise that has never won an NBA title in their entire history. They are a small-market franchise. Therefore, they would keep the star talent they drafted at any cost.

Morant had probably never seen anything close to $100 million dollars in his life. His contract is a 5 year 193 million dollar contract, but making an all-NBA team raises it to $213 million. This should make us wonder what he did when finding out the news and how he processed the whole situation.

The life and journey of an NBA player are quite hard to imagine. It takes a toll on the body and the mind to keep training for every single moment of one’s career. Additionally, there is no guarantee of success and several basketball players could end up never even being able to put food on the table for a family.

From that perspective, Ja is incredibly lucky. He is also single-handedly responsible for the good fortune that is coming his way. After all, this is the result of being an NBA star. Morant was asked what he felt when he found out the contract went through.

“Obviously for starters, I earned it… Number 1 but uh definitely a blessing definitely for you know me and my family to be able to achieve that and I always gotta ya know keep it going.”

He also went on to describe the exact moment he found out. It is important to keep in mind that he might have hidden out personal details and words said to some extent.

“I was in Utah and I was sitting on a balcony I recorded a little video and sent it to my mom dad and Lil sister like you know we made it that when it hit me that I just signed for a lot of money.”

Ja has made the Grizzlies a powerhouse, ever since joining the league. He has proven that he can go toe to toe with the best in the league. Despite being only 22 years old, he is an NBA star and deserves the exact same financial treatment.