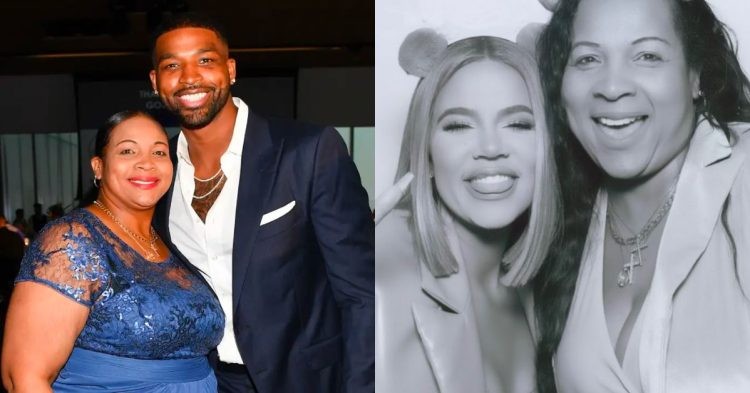 Khloe Kardashian and Tristan Thompson dated for a while and even had children before the ugly split. The pair broke up a few times and have patched back up as well. Recently, tragedy struck Tristan when his mother, Andrea Thompson, passed away due to a heart attack. She was a pillar of support for the NBA star, who has climbed his way to the top since being drafted 4th in the 2011 NBA Draft by the Cleveland Cavaliers.

Rumors emerged a few weeks ago mentioning that Khloe and Tristan might be back together after the pair were seen together alighting a private jet. However, the truth is that they remain friends and are currently co-parenting their children.

What did Khloe Kardashian say about Tristan Thompson’s mother, Andrea?

In an Instagram post, Khloe penned a heart-touching message to Andrea. Although she had a public breakup with her son, it looks like Khloe remained close to Andrea. She wrote, “I have been avoiding this…I have so much to say but nothing at all…. I have so many emotions and still I feel numb. Life can be brutally unfair at times and This has been one of the toughest times in so many of our lives. But at the same time, I feel blessed that I am lucky to have had someone that makes saying goodbye so incredibly difficult.”

“So difficult that I’m choosing not to say goodbye for good because that is something I cannot fathom. Goodbyes for good are something I don’t believe in. I KNOW I will see you again. I know I will hear your sweet voice and infectious laugh again… I’ll see you again with the many that have gone before you that I so desperately miss, love and cherish. So, I’m choosing to say, that until I see you again in Heaven, I miss you and I will continue to miss you more and more every single day,” Khloe added.

Khloe and Andrea often shared images of themselves on social media. The model might have had a tough time with Tristan but she shared a beautiful relationship with his mother. Khloe certainly believes that she will meet Andrea again, and refuses to say goodbye. Along with that, the ‘Keeping Up With the Kardashians’ star mentioned that Amari will be safe. Amari is Tristan’s younger brother who has not been fortunate like the rest and suffers from epilepsy.

Khloe and Tristan have two children, a daughter named True and a son whom they welcomed through IVF last year. The name of the son has not been revealed to the world.