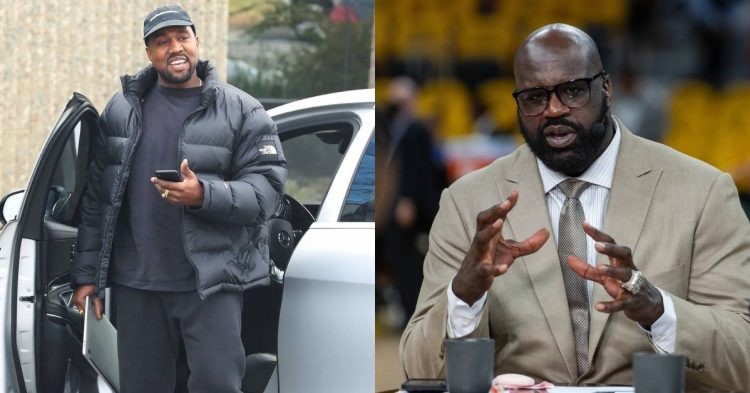 We have been hearing the name Kanye West a lot nowadays. The main reason for that would be the fact that the rapper has been involved in plenty of controversies in recent times, mainly regarding his anti-Semitic comments. His remarks and promotion of hate speech prompted many, including fans to criticize him. In addition to that, Kanye was also banned from Twitter for making remarks on the platform.

That was until Twitter’s new owner Elon Musk welcomed him back a few days ago. Right after that, West made numerous tweets about various personalities. He also posted an image of Kyrie Irving, who has also been suspended by the Brooklyn Nets for anti-Semitic actions.

Shaq is in business with Jamie Salter

Another NBA player to be mentioned on Kanye’s Twitter was the great Shaquille O’Neal. The American rapper disrespected the former LA Lakers star and Jamie Salter. For those who don’t know, Jamie Salter is the CEO of Authentic Brands Group. As Kanye mentioned, both Shaquille and Salted are indeed in business together. Shaq is a shareholder in Jamie’s company and is one of the largest as well.

West’s tweet involving Salter and Shaq was not received well by the latter. He replied in a tweet, “Believe me you don’t know me like that. Worry about your business, and to quote the once great Kanye west “I got more money than you, so why would I listen to you” take my advice get your family business in order. Have a great day brother.”

Believe me you don’t know me like that. Worry about your business, and to quote the once great Kanye west “ I got more money than you, so why would i listen to you” take my advice get your family business in order. Have a great day brother.

It seems like O’Neal wanted West to take a look at his current situation before talking about others. For context, Kanye has recently lost his billionaire status. The main reason for that would be because huge brands like Adidas and GAP dropped their endorsement deals with the rapper.

In addition to that, Kanye’s “Yeezy” line contributed plenty to his net worth, and since Adidas is not on his side anymore, his net worth has now dropped below soccer star Cristiano Ronaldo’s. Shaquille hinted that West is not having the best time right now by mentioning that he wouldn’t listen to him since he has money. That was also a quote by Kanye, as the 50-year-old mentioned.

In addition to that, Shaquille also mentions that Kanye has to get his family situation in order. The 45-year-old has had an ongoing battle with ex-wife and Hollywood A-lister Kim Kardashian in recent months. It seems like Shaq wanted Kanye to focus on himself rather than commenting on others as he gave a valuable piece of advice to the rapper at the end.

West will be aiming to get back on track after the recent controversy. He would have to focus on building his brand from scratch again after it has all been demolished.