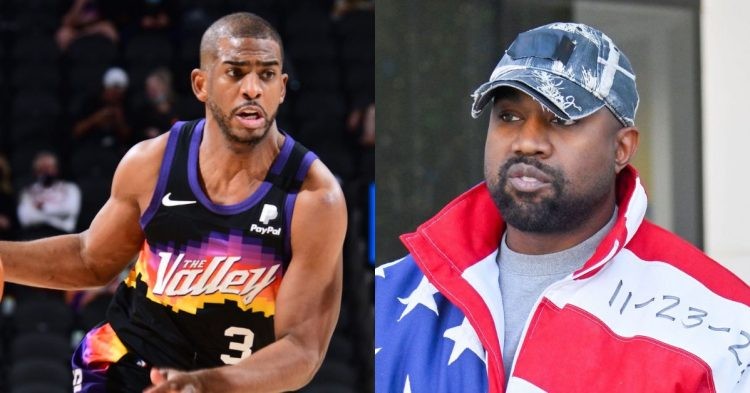 The Chris Paul and Kim Kardashian saga has taken over the internet completely. It seems like it’s all the world is talking about right now. Kanye West has managed to get the spotlight on him after he tweeted that he once caught CP3 with Kim. Since then, the rumor fest has been going on nonstop.

Recently, a YouTuber named Prophet Muscle, who claims to be Ye’s bodyguard confronted Paul at a gas station. Throughout the entire confrontation, Paul looks confused and looks like he doesn’t know what is going on. Prophet Muscle posted the video on his official YouTube channel. When he asked Paul if he wanted to fight while throwing some punches in the air, the NBA star said, “Hell nah.”

Chris looked uninterested in what Prophet Muscle had to say during their “conversation”. In the end, when he wanted to take his Ferrari and leave the gas station, the YouTuber said, “Don’t leave man, I gotta knock you out for being a snitch in the NBA.” Together with that, when he mentions the person who sent him over to meet with Paul, it looks like the YouTuber bleeped the name out of the video, but mentions “Ye” in letters on the video.

It looks like Prophet Muscle took it upon his own hands to deal with Paul. There has been no official confirmation that he is Kanye West’s bodyguard. The saga still seems to be going on as the Phoenix Suns star remains silent about the matter as well. Many claim that Ye has done something shocking to ruin Paul’s marriage.

Who is Chris Paul’s wife?

Chris Paul has been married since September 2011. He tied the knot with Jada Crawley when he was playing for the New Orleans Hornets (now New Orleans Pelicans). Crawley was born in 1984 to grow up in North Carolina. Jada is currently working as a fashion designer, as well as an entrepreneur. However, despite donning many hats, being the wife to Chris Paul has helped her gain the most attention.

Jada and Paul have welcomed a son and a daughter. Their son, Christopher Emmanuel Paul II, is the eldest after being born in 2009. He has a younger sister who goes by the name, Camryn Alexis Paul. It looks like Chris Paul II is also a basketball player just like his dad.

That’s just one of the many things that the Pauls have going for them. Jada runs the CP3 foundation together with her husband. The couple co-founded the foundation, and seem to be doing well as philanthropists as well.

It looks like Prophet Muscle isn’t Ye’s real bodyguard. One who was actually in charge of protecting the famous American rapper was Steve Stanulis. He started his working career as an officer for the New York Police Department (NYPD). However, he had to quit his role due to an injury he suffered on the job. This was the time when Steve decided that working as a bodyguard might be the right job for him.

He worked for Kanye for two weeks in 2016 and was quickly fired by the rapper. Since then, he has been going public with some shocking details about the American personality. On the Hollywood Raw podcast, Stanulis mentioned that Kanye was disrespectful at times. He claimed that Ye was once unhappy when his bodyguard got in his shot in front of the cameras to protect him.

Together with that, Steve also claimed that Ye was the “neediest” and “most moody” to work with. Although he didn’t explicitly claim that Kanye was the one celebrity that he didn’t want to work with again, Steve said that people already knew the answer to that question.