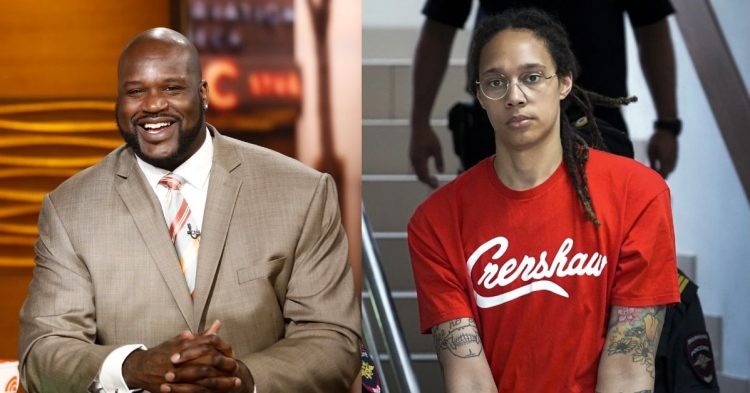 Shaquille O’Neal is a former NBA player who now conducts a podcast called “The Big Podcast with Shaq“. He discussed the trending issue of WNBA star Brittney Griner being sentenced to 9 years in jail. Most of us know Griner was arrested for carrying “marijuana vape cartridges” through a Russian airport. This crime may be victimless. However, that does not mean she was completely innocent.

Nonetheless, 9 years in prison is no joke and one must wonder why she was unable to get a better deal. There are several rumors floating in the air about a potential prisoner swap. However, this would mean sending a Russian criminal back in return for Brittney Griner. Shaq explained what he thought about the whole situation and what is to become of Griner.

Let us not get facts confused. O’Neal is not wishing bad or hoping her situation gets worse. This is a situation where she is guilty. However, she did plead so from the start and did not try to hide her wrongdoings. One would think the Russian authorities would take it easier on her and deliver a lighter sentence. Instead, they have sentenced her to a full 9 years in prison.

Shaq had an interesting take on this whole situation. He always speaks out on these types of issues. Moreover, he is well aware of the floating idea of a prisoner swap. Yet, he remained sympathetic and did not speak too harshly of any party involved.

“I see stuff going on that I only see in Bruce Willis die-hard movies. ‘I’ll give you Brittney if you give me the #1 arms dealer back’… And then I’m hearing she was told ‘hey you plead guilty, we’ll slap you on the wrist and let you go, and then it was like uhmp thank you very much, 9 years. Now I don’t know anything about prison at all. I have seen a lot of movies and I’ve never seen a Russian prison that was luxurious in the movies. So yeah, I hope she’s okay. I hope somehow they figure out a way to get her out but it’s an all-around unfortunate incident.”

This is truly an unfortunate situation where a woman is being punished severely. Shaq must know that prison life in any country, let alone Russia, is luxurious. Additionally, if he is right and the Russians have extended her sentence in order to negotiate a prisoner swap, then it would indeed be like a “die-hard action movie”.