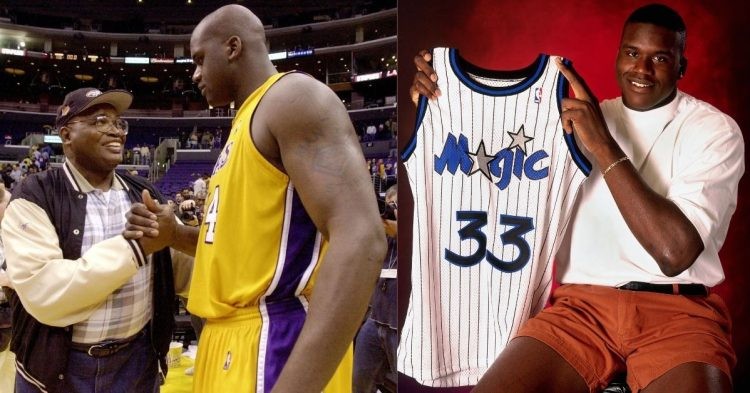 Shaquille O’Neal is widely considered one of the most dominant and powerful players the NBA has ever seen. He is a 4x champion, winning 3 titles with the Los Angeles Lakers and another with the Miami Heat. We are all familiar with what O’Neal is capable of. However, not everyone knows the origins behind Shaq’s power.

He recently sat down with Youtuber Logan Paul and shared how his father made a tremendous change to his life and inspired him to become a future great player. It is important to note that Shaq is actually referring to his stepfather and not his absent birth father. We should want to know how Philp Harrison, impacted his adopted son’s life.

Not many people are familiar with Shaq during his developing years. After all, most potential NBA players are only heard off during high school or college. Shaq was able to establish himself as a force unlike any other at only 10 years of age. He revealed that his father, Philip was the one who helped him develop.

“So age 10 cuz my father thought me all sports boxing football baseball basketball. So we beat this team one time 100- 4 and I remember this kid his father running on the court said no way this kid is 10. If he is 10 he’s going to be the best basketball player ever and my father was so happy he said see what happens if you listen to me.”

O’Neal went on to explain how this eventually led him to trust his father more.

“Shortly after that going to the next game, I see my favorite guy in the world Dr. J. He goes baseline and the crowd goes crazy… After that moment when I saw Dr. J and I was like sir, I think I know what I wanna be. I want to be an NBA player And he says to me if you listen to me I’ll make you one of the best big men ever. He had a tear in his eye So I had to believe him. So at 12, I knew I was bigger than everybody else and he just taught me to be mean and ferocious…”

We should certainly be thankful Mr. Harrison decided to train Shaq and make him an elite basketball player. There are millions of fans across the world who should indirectly be grateful to him.