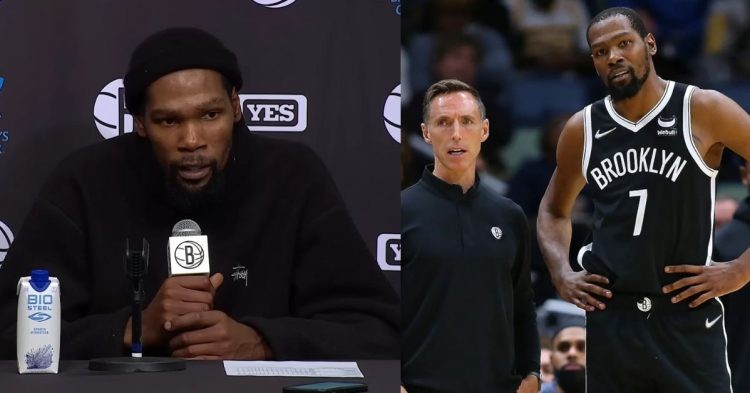 Kevin Durant in a postgame interview and alongside Steve Nash (Credit: Twitter)

Brooklyn Nets superstar Kevin Durant made waves this NBA offseason when he demanded for a trade. He also asked that there be a change in management, essentially the firing of the coach and the general manager. However, he soon got behind closed doors with the Nets’ ownership and we assumed that they were all in this for the long haul.

The Nets have gotten off to a slow and rocky start this 2022-2923 NBA season. They currently hold a record of 2 wins and 5 losses. As a result, the Nets made the decision to part with their coach, Steve Nash. Considering that was what Durant wanted, the internet had a field day.

Speaking of Durant, he was recently interviewed and asked about how he felt about their coach leaving. One should want to know what KD said and how much truth there could be to it.

Was Kevin Durant shedding crocodile tears over Steve Nash being fired by the Brooklyn Nets?

The 2x NBA champion has created a reputation for himself as a soft-skinned person. There is no telling what Steve Nash could have done to make KD feel he was detrimental to the team’s success. However, the crux of the issue is the fact that we assumed Nash had the support of the Nets’ ownership.

“We had a tough start, it was a rocky year last year, a rocky summer. We knew that everybody was being evaluated. I liked working with Steve [Nash]”

Kevin Durant said that he was not consulted on Steve Nash leaving the Nets pic.twitter.com/KZ9TdcMkub

6 games into the season and Joe Tsai has decided to go another way with the coaching for the Nets. We should remember that Durant also asked for the Brooklyn Nets GM Sean Marks to be dismissed. That has clearly not happened.

Nonetheless, a lot of time passed since then and we assumed the Nets were riding with Steve Nasha as their coach. Apparently, so did Kevin Durant. He shared how he found out and whether he was consulted in the making of this decision during a recent interview.

“Nah… I mean c’mon let’s be real we pros, we veterans you know we had a tough start as a rocky year last year, rocky summer…We knew that everybody was being evaluated. That’s just how it is in the league you know.;..So you know um I liked working with Steve. I liked working with the coaching staff. It was a roller coaster last few years but the core of it basketball is something we all love to do. So, regardless of who the coach, regardless of you know, the circumstances, still gotta come to work. So I enjoyed coming to work with Steve.”

Durant really didn’t waste too much time talking about how much he would miss Steve Nash. After all, he did try to get the man fired before the start of the season.
Tags: Brooklyn NetsKevin DurantNBASteve Nash
Previous Post