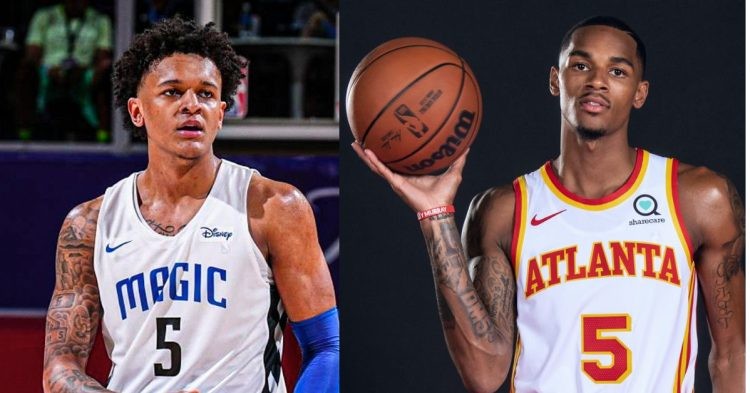 Paolo Banchero is the #1 pick in the 2022 NBA draft and was selected by the Orlando Magic. He is yet to play in his first official NBA game. Be that as it may, Banchero is already getting a feel for the atmosphere and drama that comes with playing in the league. He got to play in the “Zeke-End“, a tournament organized by former NBA player Isaiah Thomas.

Dejounte Murray, a star in the league and recently traded to the Atlanta Hawks decided to participate in this tournament as well. Both Murray and Paolo were going at each other on the court and even took their interaction to social media. It is important to analyze this fight and understand each person’s side of the story.

Every NBA star has their own sense of ego. Some acts of aggression and dominance are considered fine, while a few might even turn into full-out brawls. Taunting the opposition and using trash talk has always been the backbone of the sport. Clearly, something happened at “Zeke-End“.

Paolo must have offended Murray, either through his words or his play. Therefore, Dejounte posted a video of him hitting a sick self-alley dunk over the much bigger Banchero. This instantly went viral on Instagram as Murray has a million followers.

Banchero, who uses Instagram himself shared the same post on his story. However, he included an interesting caption, “ Lol u unfollowed me on the gram and everything, it must be personal, huh, just make sure you guard up next time and stop sending doubles family.” He added a laughing emoticon to the end to make the situation seem more humorous.

Many people know the pain of losing followers for any reason on social media. Perhaps, Paolo was feeling hurt and frustrated over this whole situation. It is also possible he didn’t care and just wanted to say his piece. Dejounte responded with an Instagram story of his own.

“You tried to flex that #1 pick shit on me when I’ve been rooting for you when you was a kid asking to rebound for me. Don’t get on this internet saying Nothing… You changed from the humble kid you always was and I stand on real shit boy and you know! you made it and changed and I lost all respect.”

Murray concluded, ” Stay humble, this life is now real and ain’t no joke. I still want to see you win because that’s who I am.” it is nice that he managed to be something civil towards the end of his message.

This is the true nature of arguments. No one is satisfied or willing to hear the other side without responding. Paolo Banchero could have ignored this response but chose to give it right back. ” Same humble kid always vouched for you don’t switch tha narrative for tha internet…Shoutout to IT for a great event“.

It is quite difficult to take sides in petty fights like these. Perhaps, Dejounte was wrong for posting the video with the caption ” Welcome to the big leagues (laughing emojis)… Disrespectful they said…Yeah I know” Banchero couldn’t take this lying down and chose to respond, even though he was unfollowed by the Hawks star.

It is amusing that young NBA players can’t wait until the NBA preseason and are going at each other in pro-am tournaments. Hopefully, the Orlando Magic and the Atlanta Hawks play these two stars when they match up this season. That will give these two a chance to put their money where their mouths are in an official NBA game.