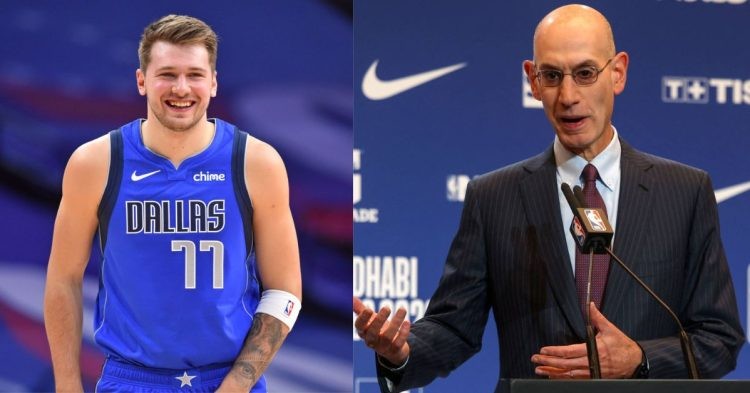 Luka Doncic had quite an interesting response when asked to compare the NBA and the EuroLeague. As we all know, the NBA is the largest platform and organization for playing professional basketball. It is widely considered the best arena for basketball, where elite athletes showcase their high levels of talent.

However, the Dallas Mavericks superstar didn’t hold back his opinion when the media compared the NBA with the EuroLeague. We should certainly wonder what he had to say and how much legitimacy is in it. After all, if his claims are true, NBA commissioner Adam Silver might have to wake up to the reality of the situation and improve the standard of these games.

As some of us are already aware, Luka is from Europe and spent many years of his early life competing in the EuroLeague. he did so for a team called Real Madrid, winning multiple MVPs and tournaments before finally applying for the NBA draft in 2018.

Yeah, no wonder he does, since in Euroleague there are 18teams and only 8participate in playoffs, so the stakes of every single game are much higher than NBA.

Luka has defended the quality of games played in Europe and even made claims that they were inherently tougher than NBA games. He even went on to say that it was easier to score in the NBA. At least when compared to the EuroLeague.

Smart. The refs are better too.

After his recent match against the New Orleans Pelicans, Doncic was interviewed and asked how much he actually watches NBA games as a fan. To that, he had quite a straightforward response.

“I’m not really, I mean I watch some NBA games. But I was, I watch more Euroleague than NBA…but if its a really good game and it’s on TV, uh I’ll watch it.”

The NBA has a problem. Time to wake up Adam Silver

This message has NBA fans reacting and calling the NBA Commissioner into the picture, “The NBA has a problem. Time to wake up Adam Silver”. Some even chimed in claiming that it had to do with the regulating of NBA games by referees. Others were more defensive and said it had to do with Doncic’s nationality and upbringing.

“I only watch nba when the playoffs start. That’s when at least they start to play some defence.”

I only watch nba when the playoffs start. Thats when at least they start to play some defence

In any case, we are glad to see that Luka is supporting his former league and holding it on par with the NBA. Since he also claims it is harder to score in the EuroLeague than in the NBA, we should expect him to have a couple of NBA championships soon enough to back up his claims.