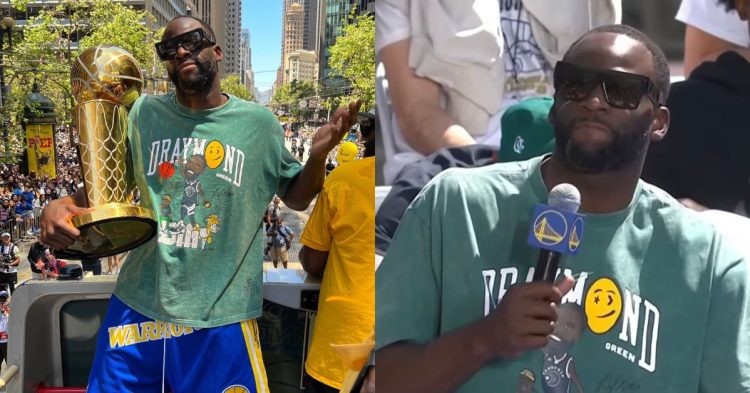 It has been a wild season for Draymond Green and the Golden State Warriors. They have just won their 4th NBA Championship and recently held a parade in front of their fans to celebrate the title win. It was during this parade that DG delivered a memorable and hilarious speech.

DG started his speech in classic DG style. He said, “I’m just trying to think of the most controversial thing to say, like the media”. We all know he loves to piss people off. Towards the end of his speech, he said, “I’m going to continue to destroy people on Twitter, as I have been”. Back in 2021, he stood for his American compatriot Kevin Durant. A fan mentioned that “KD is not that guy” to which DG straight up replied saying “Dummy!!!”

During his speech, DG mentioned that he was numb to the feeling after the game. He went ahead and said, “what brings me the most joy is seeing the guys winning it for the first time”.

For the young players, like Andrew Wiggins & Jordan Poole, on the Warriors roster, the 2022 title was the first one. DG also mentioned that there is nothing like the feeling after you win your first championship and you never get it again. This particular seemed to be wholesome and brought a new side of DG.

Draymond’s speech seems to be one where he has the last laugh against his haters. He was called out many times by fans and critics for his lack of offensive contribution to the Warriors’ game.

However, it turns out his defensive plays have proven to be as important for GSW. He boasted a defensive rating of 102.6 this season, making him a strong contender for NBA Defensive Player of The Year. The 32-year-old last won it in 2017.

In addition to that, the Warriors star also admitted that everything had to be aligned for his team this season. He claimed earlier that sometimes it did not have to be that way if you were that good, but the current Warriors team did not have the chemistry they wished for and their performances were disappointing for a couple of years. However, it is safe to say that they have bounced back, just like we all knew they would.