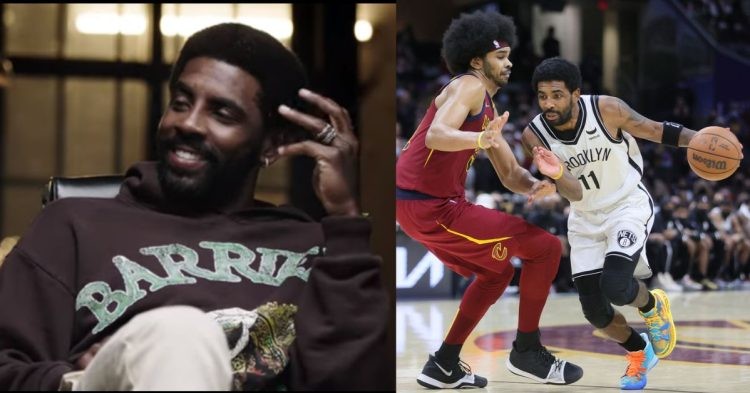 Several NBA experts are of the opinion that Kyrie Irving is one of the most skilled players in the league. Some even go on to say that he is the most talented player to touch a basketball. Irving’s ability to create his own shot and finish at the rim is second to none. For a player his size that is.

Kyrie recently appeared on an episode of “The Shop” called “Superheroes need help“. There he revealed to Maverick Cater and several other people how he became ambidextrous at a very young age. Fans of the Brooklyn Nets star will be interested in hearing what he had to say and knowing the context of the conversation.

The world today is quite modern. However, some stereotypes and beliefs are yet to be completely done away with. There has been a stigma associated with a person being left-handed. In fact, it would surprise many people to know that left-handedness is associated with negative qualities such as stupidity and awkwardness.

Moreover, people claim that lefties have an imbalance in processing emotions and are more susceptible to mental disorders. Thus, Irving’s school decided to make him change his dominant hand. “Catholic school didn’t let me stay left-handed. I was getting slapped on my hand for writing with my left hand. That was old school, this was in 96″.

It is certainly wrong to punish a child, especially with physical punishment at any level and time. However, in this case, perhaps we should be thankful his school made him use his right hand. As a result, he became an ambidextrous player. He also revealed that he finds it completely natural to use the basketball with his left hand like he does his right.

We should look to break the stigma associated with being left-handed if it still exists in our society. People should be celebrated for their uniqueness and not treated differently or forced to follow a conventional norm.

The name Kyrie Irving is associated with otherwordly ball handling and control throughout the world. Several children want to dribble the ball like Kyrie almost as much as they would like to shoot it like Stephen Curry. This is how Kyrie achieved this level of ball control.