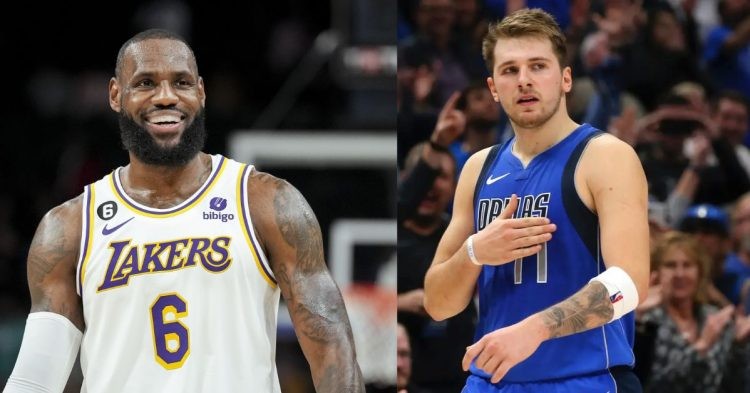 Luka Doncic and LeBron James on the court (Credit: Twitter)

Luka Doncic had quite a response when asked about his plans for the future. NBA fans already know that the Dallas Mavericks star is emerging to be one of the best players of this generation and a potential future face for the league.

The comparisons to NBA legends like Michael Jordan, Kobe Bryant, and LeBron James have already begun. As we are aware, LeBron is expected to pass Kareem Abdul Jabbar as the NBA’s all-time scoring leader. This is truly a testament to both his greatness and longevity. Doncic was asked to compare himself to LeBron James and responded with a brutally honest statement.

Due to his unique mixture of size, passing ability, and basketball IQ, Luka Doncic has already been compared to LeBron James several times in his young career. Fans could argue that he is just as impactful towards his team winning as LeBron James was during the early years.


That said, we all know that the King has been in the league for two decades now and is currently in Year 20. Playing at the highest level for most of this time and having few injuries have allowed him to break the existing scoring record held by Kareem Abdul Jabbar. Doncic responded frankly when he was asked what he felt were the odds of him catching up to LeBron in terms of scoring.

“It’s always a possibility, but it’s going to be really tough. You gotta have a guy that plays for 20yrs… If you’re saying me there’s no way [cuz] i’m not playing that much.”#MFFL #LakeShow pic.twitter.com/gPphA5I7mt

“I mean it’s always a possibility you know. But it’s going to be really tough. You gotta have a guy that plays for 20 years in that shape…How he holds up his body… it’s very hard to hold that body…If you saying me there’s no way cuz I’m not playing that much… But you know just amazing to watch him.”

Doncic certainly makes a valid point. One that NBA fans should certainly ponder over. We have never seen a player stay in elite shape for as long as LeBron James has. That is a huge reason he is finally on the verge of breaking this all-time record. Even if Doncic or some other future talent is able to play at a higher level and score more compared to LeBron, it is nearly impossible for them to do it over a long stretch of time.