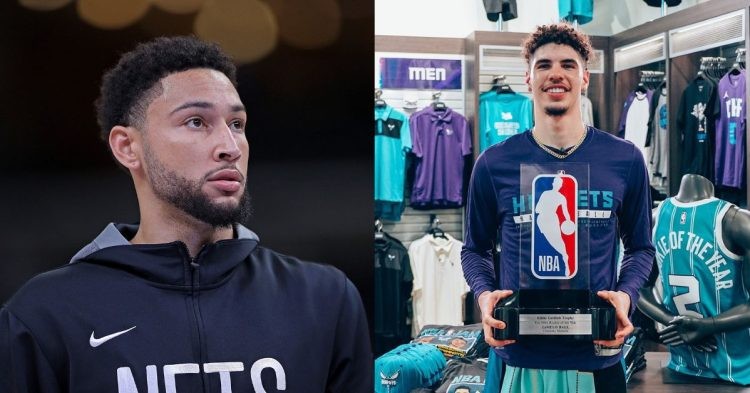 Ben Simmons of the Brooklyn Nets and Lamelo Ball of the Charlotte Hornets (Picture Credit - Twitter).

The Brooklyn Nets are in the news for drama more often than they are for basketball, the Nets have started their season with a record of 3 wins and 6 losses. throughout this 9 game stretch, Kevin Durant has been phenomenal scoring over 25+ points in all of his games so far.

The Hornets haven’t been doing too well either with a record that is identical to the Nets. One player that has stood out for the Hornets so far is Terry Rozier, throughout the first 9 games Rozier has been averaging 23.5 points and 8.5 assists per game.

Ben Simmons, T.J. Warren, and Kyrie Irving are all out for the Brooklyn Nets game against the Hornets

The Hornets will also be missing some of their best players as Gordon Hayward, Terry Rozier, and LaMelo Ball are all out against the Nets.

Kevin Durant will have to take matters into his hand and run the offense for the Nets since he is going to be the only star on the floor against the Hornets. If the Hornets can do some magic and do the impossible task of slowing Kevin Durant down then they might make something exciting happen, but even if everything goes well, winning without their top-three starters will be a tall task for the Hornets.