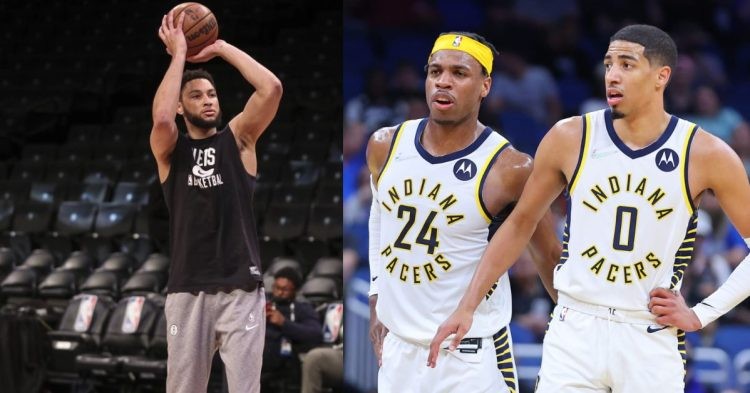 Ben Simmons has not gotten off to the best start with his team, the Brooklyn Nets this NBA season. He forced his way out of Philadelphia and got a fresh start in Brooklyn. However, it seems he still has the same demons to fight and is simply scared to score the basketball.

As a result, Kyrie Irving, Kevin Durant, and the rest of the squad are simply not that good. They currently have a record of 1 win and 5 losses. One of the worst in the Eastern Conference. Thus, this season is going to be an uphill battle for them from the very beginning.

The Nets will be facing the Indiana Pacers, a team with a record of 3 wins and 4 losses. They have a good squad with Myles Turner, Buddy Heild, Tyrese Haliburton, and others. This is a must-win game for Brooklyn, which is a team looking to be in the race for an NBA title.

With that being said, we should wonder what the availability of players on both sides is like. An idea of the rosters and context of this matchup is always useful.

Back when the trade for Ben Simmons was occurring, the Nets were already a struggling team. That is why James Harden asked for a trade midway through the season. When they were swept by the Boston Celtics in the NBA playoffs, Simmons did not play for them citing a back injury.

This led several NBA analysts favoring the Nets to claim that the series would have gone differently if he were present on the court. However, this slow start by Brooklyn seems to disprove that. Simmons is fouling out of games and not playing to his true capabilities.

In fact, he isn’t even guarding as well, forget the offensive deficiencies. Kyrie and KD can score. But they aren’t known for their on-ball defense. Thus, the Nets end up playing 4 on 5 basketball during pivotal stretches of games.

With that being said, here are the injury lineups and expected rosters for both sides

The Brooklyn Nets already played the Indiana Pacers in their previous match. Brooklyn ended up losing that game 116-125. Therefore, this is a revenge match. Additionally, the loss is still fresh in the Nets and they will be looking for redemption.

At the end of the day, this is KD’s team. However, Kyrie Irving has been playing just as well, if not better than KD over the past few games. Given the difference in their size and playstyle, Durant should be scoring more than Irving and be impactful on both ends of the court.

However, he is simply not a good defender and that is what the Nets traded for in Ben Simmons. It will look really bad if these three stars end up losing to the Pacers in back-to-back games. Brooklyn will be favored to win this game for that reason alone.
Tags: Ben SimmonsBrooklyn NetsIndiana PacersNBA
Previous Post