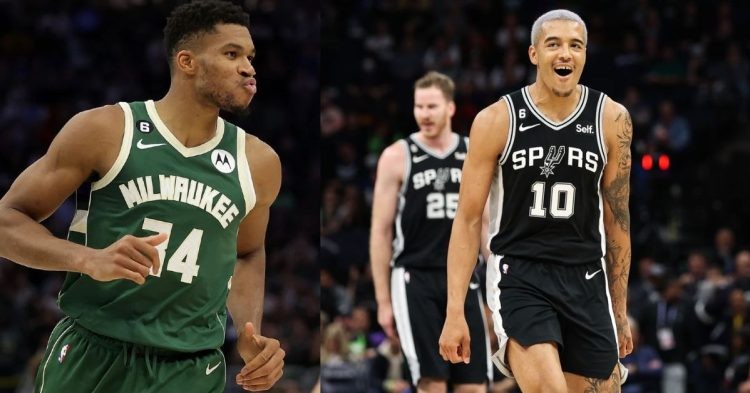 Giannis Antetokounmpo and the Milwaukee Bucks have gotten off to an excellent start this NBA season. They currently hold a record of 10 wins and 1 loss. Trae Young and the Atlanta Hawks are the only teams who have been able to hand the Bucks a loss so far.

Health and luck play a role in winning multiple games in this manner. However, it seems that multiple Bucks stars will not be playing in tonight’s match against the San Antonio Spurs. NBA fans know that the Spurs traded their star Dejounte Murray to the Atlanta Hawks. Therefore, they are considered to be a bottom-tier team in a state of a rebuild. Nonetheless, they are still playing considerably well and hold a record of 5 wins and 7 losses.

We should wonder if the Spurs will be able to hand the Bucks their second loss of this NBA season. This will depend on the availability status of players on both sides.

Unfortunately for Bucks fans, Giannis will not be playing in the game against the Spurs. This is the second game he will have missed in a row and did not play against the Oklahoma City Thunder as well. Despite the Greek Freak’s absence, the Bucks were able to win that game with a final score of 136-132.

The game against the Thunder was very narrow and went into overtime. This proves that the Bucks are certainly beatable unless they utilize their best lineup. With that being said, let us take a look at the injury reports and expected rosters for both sides.

As we can see, all 3 major stars from the Milwaukee Bucks will not be playing in this match against the Spurs. Finally, let us take a look at the expert picks and predictions for this game.

One game certainly does not matter a lot. However, the reality of the situation is that the San Antonio Spurs are currently a rebuilding team. They have next to no star talent on the roster. If Giannis misses a lot of games due to his injury, their record could change drastically.

The Bucks are posting the same initial injury report for tomorrow’s game:

All that begins with a single game and the Spurs will be looking to defeat the injured Milwaukee Bucks. If they are successful in doing so, they will have handed the Bucks their second loss of the NBA season.