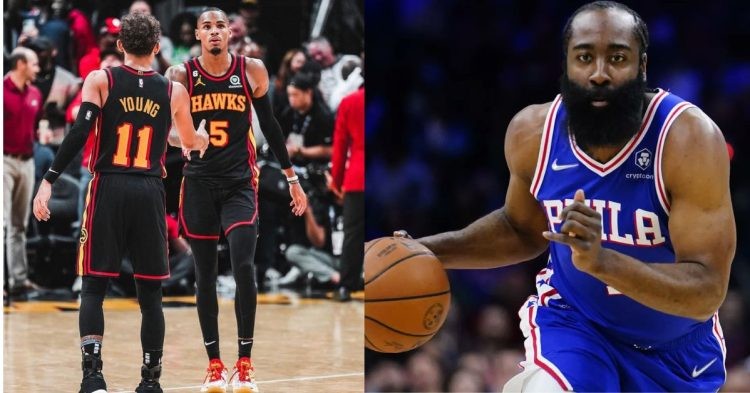 The high-flying Atlanta Hawks host the Philadelphia 76ers at the State Farm Arena in a mouth-watering clash. James Harden will miss the game.

Both teams have had some standout performances this season and are fighting for the top seeds in the Eastern Conference. The Hawks go into the match with their solid 7-4 records, compared to the 76ers shaky 5-6 record.

James Harden will miss the match with an injury

Harden suffered a right foot tendon strain during the 76ers’ match against the Washington Wizards on 3rd November and has not appeared since, with reports stating that Harden will be out for a month.

The 76ers fans hope that big man Joel Embiid will continue his spectacular performances in the recent games, scoring 33 points and ten rebounds in their win against NBA favorites Phoenix Suns on Tuesday.

The Hawks are missing Bogdan Bogdanovic, who underwent right knee surgery in May, and was predicted to be back into the lineup by September, but the date has expired, and he’s nowhere close to returning.

Bogdan Bogdanovic getting in some conditioning w/ some hyping up from a couple voices in the background. pic.twitter.com/lgHlgxTp7J

Bogdanovic had a splendid 2021-22 NBA season, averaging 15.1 points and four rebounds per game.

However, with the Hawks performing as they are, there will be no rushing Bogdanovic’s return.

The 76ers have adapted quickly to a Harden-less roster as Joel Embiid and Tobias Harris have stepped up with their performances in recent games.

Embiid scored 33 points and made ten rebounds in the 76ers’ win over the red-hot Phoenix Suns.

Embiid was supported by Forward Tobias Harris, who also had a great game, scoring 21 points with eight rebounds.

The Hawks are expected to win this clash tonight

The 76ers will be looking to continue winning after dominating the Phoenix Suns 100-88. At the same time, the Hawks are hoping to bounce back following their narrow defeat to the Utah Jazz by 125-119, inspired by Lauri Markkanen.

The match will be a treat for fans as they see All-Stars Trae Young and Joel Embiid duke it out at the State Farm Arena.