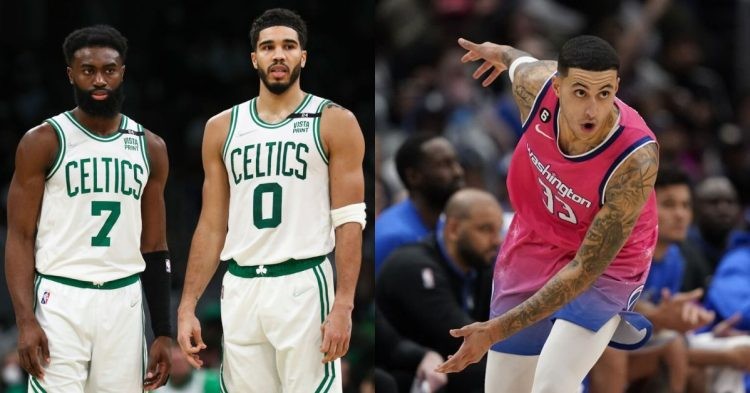 Jayson Tatum and Jaylen Brown of the Boston Celtics and Kyle Kuzma of the Washington Wizards. (Picture Credit - Twitter)

The Boston Celtics have been on a roll lately. They have looked extremely strong on defense and have been excellent on offense. Following some amazing play from Jayson Tatum and Jaylen Brown, the Celtics have quietly snatched the number one seed in the East. During all of this, they have only lost 4 out of their first 19 games this season. Tatum has undoubtedly been their best player throughout this stretch.

He has shown us an MVP level of play and has led the team in points and rebounds both while they continue to dominate the NBA.

The Wizards on the other hand have not been too hot this season but, they haven’t been too bad either. Throughout their first 19 games, their record has almost been balanced with 10 wins and 9 losses. Two players, in particular, have been a positive sight for the Wizards.

Kyle Kuzma and Bradley Beal have both been having a positive impact on this young Wizards squad and have the potential to lead them to the playoffs this season.

According to the reports of Marc Stein, Jayson Tatum who is currently out with an ankle injury will not be participating in tonight’s game against the Wizards. This will be a huge blow for the Celtics, other players like Jaylen Brown and Marcus Smart will have to compensate for Tatum’s presence to win against the Wizards.

The Wizards on the other hand will not have a lot of help from their bench since most of their major bench players are out against the Celtics.

Even without Jayson Tatum, The Celtics shouldn’t have too many issues in dealing with the Wizards who are already having a rough go and are on a 2 game-losing streak.

Expect another big game from Jaylen Brown who is on the verge of becoming an all-star again.