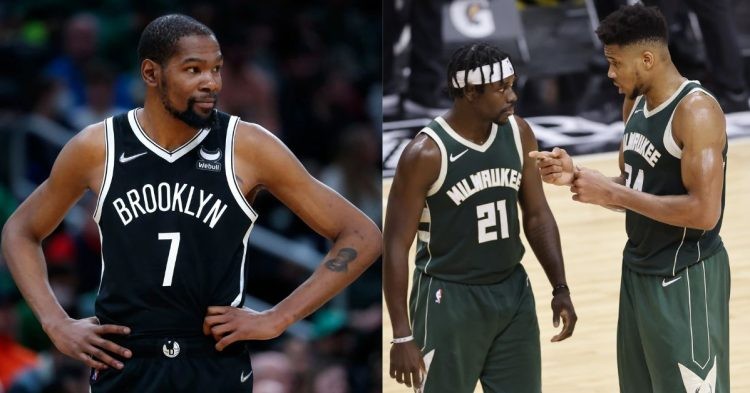 Most of us still remember the drama Brooklyn Nets star Kevin Durant caused this NBA offseason. He asked for a trade and then asked for a change in management. None of these requests were met. In any case, he and Kyrie Irving have both taken the court for their team this season alongside their new teammate Ben Simmons.

The Nets currently hold a record of 1-2. They lost to Zion Williamson and the New Orleans Pelicans and Ja Morant and the Memphis Grizzlies. The Nets won against the Toronto Raptors as well. They now have another real challenge ahead of them.

Giannis Antetokounmpo and the Milwaukee Bucks have gotten off to a great start early into the 2022-2023 NBA season. They currently have a record of 2-0 and have not lost either game to the Philadelphia 76ers and Houston Rockets. Both these teams have faced off in the recent past and have a history.

With that being said, one must wonder if all the stars and key players on both sides will be present for this game. After all, injuries always play a role in the result of some games.

Seth Curry is a player that doesn’t really need an introduction. This is largely due to the success and popularity his brother brought to his name. Nonetheless, Seth is quite a good shooter himself. He has averaged 47% from the field and 43% from the three-point line. However, he is not expected to play in this game.

Ben Simmons is still not comfortable shooting the basketball or playing aggressively. He is one of the few players on the Nets physically capable of guarding Giannis Antetokounmpo. The Bucks do not want to lose their winning streak and will be a formidable opponent.

Losing Middleton is quite a blow for the Bucks. Be that as it may, they will still be considered the favorites to win this game despite the Nets having Kevin Durant and Kyrie Irving.