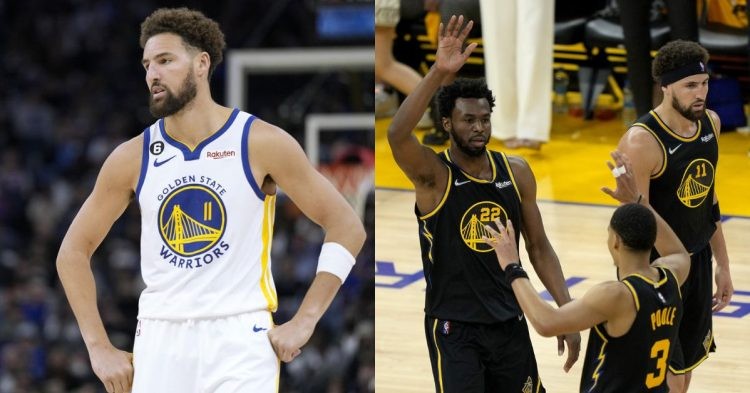 All-Star guard and 4x NBA Champion Klay Thompson is set to enter free agency after next season. He signed a 5-year, 190 million-dollar contract with the Golden State Warriors, the only NBA team he’s ever been on, in 2019. That contract will expire after the 2023-24 season, meaning Thompson will enter unrestricted free agency.

Thompson has had profound success with the Warriors, winning titles in 2015, 2017, 2018, and 2022. His backcourt pairing with future Hall of Famer Stephen Curry is famously known as the ‘Splash Brothers’, owing to their deadly three-point shooting. And deadly it is indeed, as the two have complemented each other perfectly over the years to achieve personal as well as team awards. But all that might soon come to an end.

How much does Klay Thompson earn at the Golden State Warriors?

Post their heartbreaking finals loss to the Toronto Raptors in the 2019 NBA Playoffs, the Golden State Warriors signed Klay to a whopping 5-year, 190 million dollar contract extension. It is worth noting that Klay had just suffered an ACL tear in Game 6 of the Finals. This event had led to fans wondering whether Klay will receive an extension at all.

But the Warriors showed faith in their All-Star shooting guard.  Thompson averaged 21.5 points, 3.8 rebounds and 2.4 assists during the 2018-19 regular season, earning a spot in the All-Star game but narrowly missing out on an All-NBA selection. Thompson had also been a critical part of their playoff run and had 28 points in the game against Toronto before he got injured.

“All I’ll say is that those guys are highly important to us and deserving of being rewarded in the right manner,” general manager of the Warriors, Bob Myers told reporters. “It’s hard to find high-quality people, and both of them are that. And so you just—try to keep those guys within these walls the best you can.”

4 years ago today, Klay Thompson did this vs the Knicks:

As part of his contract, Klay is earning approximately 40 million this season. His contract also includes a 15% trade kicker, but that is a slim possibility. What makes his future with the Warriors even more doubtful is the signing of up-and-coming players Jordan Poole and Andrew Wiggins to long-term contracts this past offseason. This surely indicates that the Warriors are open to a change in scenery in their backcourt.

There is a definite contract extension in Klay Thompson’s future 💪 pic.twitter.com/K2U7mDdVsO

As for Klay, he isn’t worried about his contract as of now. “I’m just going to do what I got to do to be the best I can be every day,”, Thompson told NBA.com. “I fully expect to earn another NBA contract, whether it’s this summer or next summer. I’m not worried about an extension in the meantime because I know it’ll happen if I just do my job and I just be myself.”

And though Thompson’s play might have declined as of late, owing to multiple injuries, he is still an All-NBA level player that can be a franchise centerpiece anywhere else, if the Dubs decide to move on.