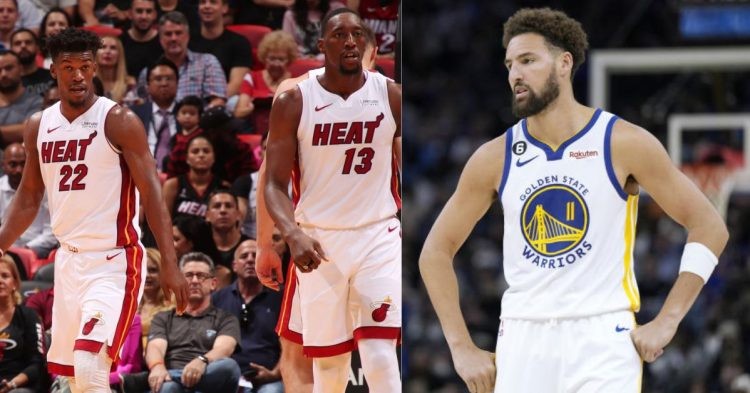 The 2022-2023 NBA season has finally commenced and the teams are off to the races. Stephen Curry, Klay Thompson, and the Golden State Warriors are the defending champions. Thus, they have the pressure of being the favorites to repeat as champions. However, it seems the powerhouses have put a target on the backs of the “champs”.

Jimmy Butler and the Miami Heat have always had an excellent team culture and dynamic. In fact, they were the best seed in the Eastern Conference last season. That is because they take every game seriously.

One may wonder how many players on each side are injured. Additionally, an idea of the roster for both sides and the context of the situation will always be useful for NBA fans.

Every year things change. There are several players on the Warriors missing from last season. Gary Payton and Juan Tuscano Anderson are a few of them. Nonetheless, GSW has paid the big bucks to keep their roster intact, while singing on future talent.

The Warriors currently have a record of 2-2. They lost to the Denver Nuggets and Phoenix Suns and won against the Los Angeles Lakers and Sacramento Kings. In the most recent loss at Phoneix, Klay Thompson put up one of the worst performances of his life. He scored 2 points and had 2 assists in 19 minutes of action.

That led several fans to deem him washed and a serious liability. However, we can’t really blame Thompson. He was injured and underwent long-term rehabilitation a few years ago. Few players have much left in the tank after something like that. Steve Kerr will be prudent about his minutes for his game vs the Miami Heat.

No way Book letting washed Klay talk to him like that????

With that being said, here is the injury report for both sides and potential rosters.

We have to presume Klay will play simply because of his legacy and past accomplishments for the team. If he continues to perform poorly, it is likely his minutes and role on the team will be greatly limited.

The Heat are known for being dark horse contenders. They have handed the Portland Trailblazers a blowout loss. This matchup between the Warriors and the Heat will be an exciting one.