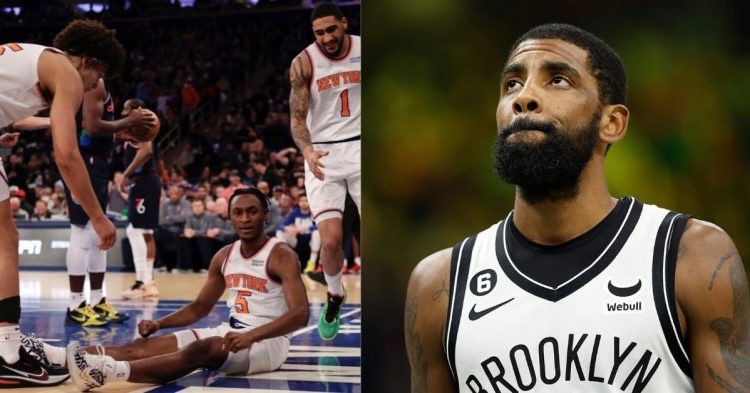 The Brooklyn Nets host the New York Knicks tonight in the first of four meetings between the crosstown rivals. Kyrie Irving is one of the big names expected to miss out.

Fans expect a spectacle between the teams, with neither currently playing at their full potential. The Nets have a 4-7 record compared to the Knicks’ 5-5 record.

Kyrie Irving will miss out because of a suspension

It comes as nobody’s surprise that Kyrie will miss the game as he serves his five-game team suspension related to the current fiasco he finds himself deep-rooted into.

Kyrie issued an apology on his Instagram not too long ago as reports from The Atheltic’s Shams Charania state that he had a productive meeting with NBA Commissioner Adam Silver.

Sources: NBA Commissioner Adam Silver and Kyrie Irving met this morning and the sides had a productive and understanding visit, paving the way for the Nets and their suspended star to work through his steps on a potential path forward.

Fans look forward to Kyrie’s return to the court as he keeps his head down and works his way back into the team.

Kevin Durant is expected to play a massive role in the match as he continues his blistering form scoring 25+ points in 11 consecutive games. In other positive news for the team, Yuta Watanabe confirmed via Twitter that his injury is just a sprain and he will be back soon.

The knicks will miss the dominance of Mitchell Robinson under the hoop, as the Center has dominated the team rankings in rebounds in the last few games he played.

Kyrie will not be playing in the match, but the Nets go into the game confidently on the back of Durant’s scintillating form.

However, the game can go either way as the Knicks look to carry their winning momentum into the game after beating the Minnesota Timberwolves by 120-107 on Tuesday. On the other hand, the Nets are looking to get back to winning ways after suffering a defeat at the hands of the Dallas Mavericks by 96-94 on the same day.