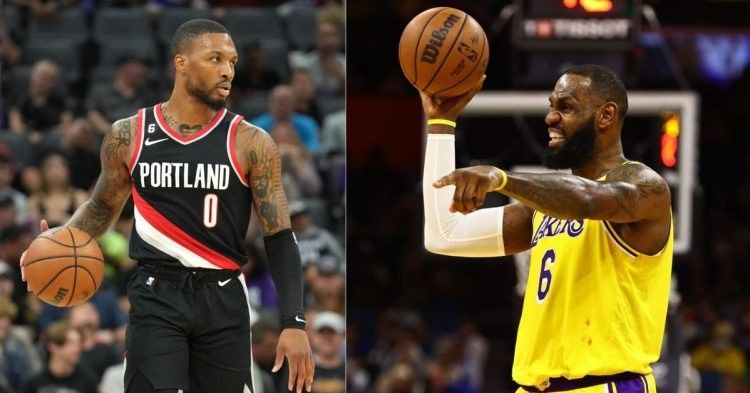 The 2022-2023 NBA season has begun. All the franchises have started the 82-game stretch that will determine their seeding for the NBA playoffs. LeBron James‘ Los Angeles Lakers and Damian Lillard’s Portland Trail Blazers are to face off. This will be a good matchup and a challenge for the Lakers considering that they have lost both the games they have played so far.

Injuries play a huge role in deciding the success of a team and its journey to potentially win an NBA title. With that being said, one must wonder which players will not be playing on both sides and what we should expect from this game.

We are familiar with the greatness of LeBron James and that he wishes to remain in contention for an NBA title. However, since his team has not gotten off to a good start, they will be looking for their first win of the season against Dame’s Trail Blazers.

That might pose to be a challenge considering that the Lakers are already dealing with injuries to their roster. In fact, both LeBron James and Anthony Davis are listed as day-to-day and considered “probable” for Sunday’s game. Additionally, they are missing several other players who are listed as out.

They include Thomas Bryant, Dennis Schroder, Troy Brown Jr, and Cole Swider. Schroder and Bryant have both injured their thumbs and are not expected to play in this game. Thus, it will fall upon the rest of the squad to try to secure this win. That will finally set the wheels rolling for the Lakers.

The Portland Trail Blazers certainly have fewer injuries in comparison. We assumed they were in the middle of a rebuild after the decision to trade CJ McCollum. However, they are still a legitimate team in the West as long as they have Lillard on the team.

Players from the team who are relatively unimportant and more role players. Gary Payton II, Trendon Watford, and Olivier Sarr are all expected to sit out. Nonetheless, the main players on the roster will play. Therefore, we shouldn’t be surprised if the Trail Blazers win this game.
Tags: Los Angeles LakersNBAPortland Trail Blazers
Previous Post