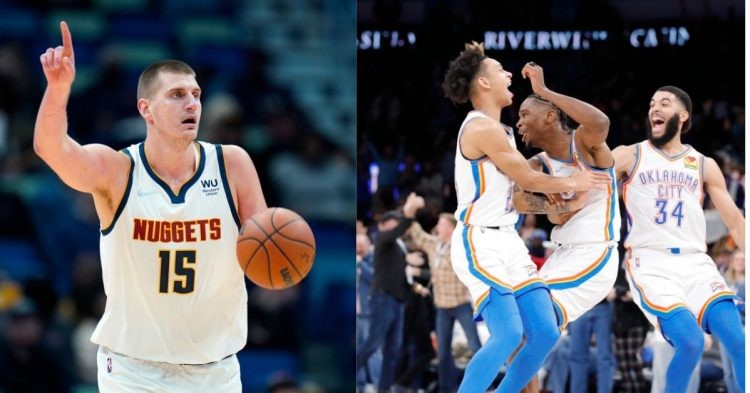 Nikola Jokic and the Denver Nuggets are coming off a loss to LeBron James and the Los Angeles Lakers. By giving the Lakers their first win of this season, the Nuggets currently have a record of 4 wins and 3 losses. There is a long way to go and a lot of basketball to be played before the NBA playoffs begin.

Jokic and the Nuggets will be facing the Oklahoma City Thunder for their 8th game of the season. We already know that OKC drafted Chet Holmgren. However, he hasn’t suited up for them as he was injured in the NBA off-season.

Nonetheless, OKC is doing quite well at the moment and has the same record as Denver with 4 wins and 3 losses. We all know how important the role of lineups and injuries can be in the outcome of a game. We should look at the same for both sides.

Jokic is currently the defending 2x MVP of the NBA. He is a talent like no other and does everything for his team on offense and defense. Jamal Murray is finally back and reunited with his teammate the Joker. However, as already mentioned, they are coming off a loss to one of the worst teams in the league at the moment, the Los Angeles Lakers.

Therefore, they will be feeling pressure to prove that their previous loss was a mere fluke and nothing more. To prevent a loss to the Oklahoma City Thunder, Denver needs to use its best available lineup. Here are the injury reports and expected rosters for both sides.

Now that we know the expected rosters and availability of players on both sides, let us look at the predictions for this matchup

The Nuggets are favored to win the matchup against OKC Thunder

There is no arguing that OKC has gotten off to a relatively good start this season. Especially considering that their latest member Chet Holmgren will not play this season. Shai has proven himself to be a player of all-star capacity with the Thunder. However, they simply do not have enough talent and firepower to take on the Denver Nuggets.

Thus, Jokic and Murray will be favored to take this game. If they do not do so, they will have lost back-to-back games early in the season.
Tags: Denver NuggetsNBANikola JokicOklahoma City Thunder
Previous Post