Is Stephen Curry Frustrated With the Golden State Warriors?

The Golden State Warriors are having a roller coaster ride of a season, however, it is worthy to mention they had one of the toughest schedule so far. Coming from a blowout loss to LA Clippers last night, the Warriors have a lot to think about. Stephen Curry pulled them from the worst record in the NBA to 10th seed in the much competitive western conference but that doesn’t seem to be enough.

While the entire league is moving toward the super team culture due to the Golden State Warriors, the latter is severely short-handed due to injuries. Klay Thompson was ruled out for the entire season due to another ACL tear during the training camp. The Warriors started the season with two terrible losses to the Brooklyn Nets and Milwaukee Bucks. Fans began to question Stephen Curry’s legacy and whether the Warriors are in a position to make it to the playoffs at all. Although they bounced back from that, they are just breaking even with a 19-19 record.

Warriors are now on a 4-game losing streak during against top contenders, even, though they defeated them in the past. While a last-second shot by Damian Lillard cost them the match before the All-Star break, poor team shooting resulted in a 30-point defeat to the LA Clippers. During a timeout last night it looked like Curry was trying to cheer his teammates and visibly looked frustrated at their performance.

Steph Curry is trying to fire up his squad. 👀

It felt like the Warriors just gave up going into the fourth with a 36-point deficit. Although we can’t hear what Stephen Curry was saying, it looks like he said “Come on! Come on! Get the fu*king ball! Come on!”. The Warriors are clearly struggling to stay afloat without Klay Thompson.

With the four-game losing streak and even tougher upcoming schedule, the Golden State Warriors can’t seem to catch a break. They face the LA Lakers, Utah Jazz next and it does not look like they are ready for it. They are 1-1 with the Lakers, however, had a blowout loss against Utah Jazz.

While Stephen Curry is the primary reason behind the Warriors not being the last seed in the west like last season, he is not making them a playoff team either. His shooting has been abysmal lately, especially against the Clippers last night. In addition, there is no other offensive option for the team in Klay Thompson’s absence. 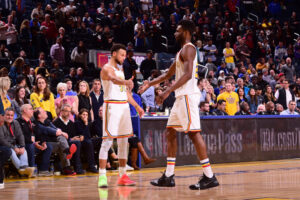 Andrew Wiggins and Kelly Oubre aren’t reliable and Draymond appears to have given up on offence entirely. His shot selection needs a lot of improvement. He settles for 3s too early in the shot clock which is not justified for a 25% 3-pt shooter. Although he is a great leader and shot maker, his shot selection is mediocre at best. Eric pascal and James Wisemen are making rookie mistakes and Warriors do not have the time to let them grow.

The team has to take advantage of the open looks they get because of Stephen Curry. He can facilitate offence using his gravity like no one else. In addition, Curry shrinks in big moments sometimes which needs to be worked on as well.

This unit is playing together for the first time and with the first half done they need to buckle up and try to be consistent. Stephen Curry thinks this is all part of the business and these young players need to learn how to ignore the chatter and internet trolls otherwise it’s easy to get caught up in all that and lose focus.