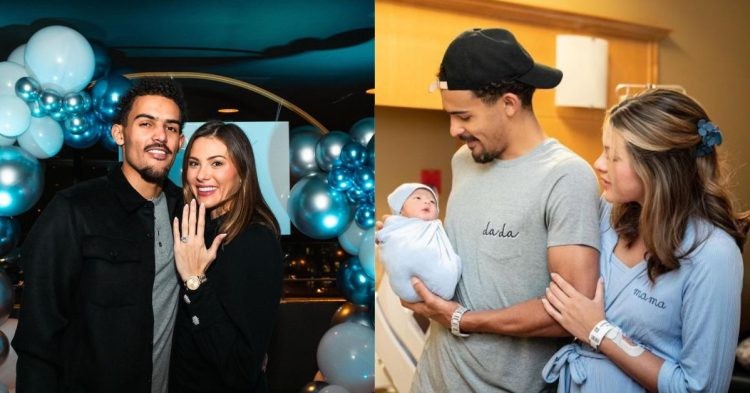 Trae Young is an NBA superstar playing for the Atlanta Hawks, he has been in the league for just 4 years and has already made his way to 2 All-Star teams and one All-NBA team. When you’re as famous as Trae Young people start asking questions about your personal life. People have been asking questions like, is Trae Young dating? Is Trae Young married? Well, no he isn’t married but he did get engaged to his long-time girlfriend Shelby Miller just a few months ago.

In December of 2021, Trae revealed that he and Shelby Miller got engaged after the Hawks star popped the question. Shortly after they got engaged Trae and Shelby welcomed their new son in June of 2022. Let’s have a look at how these two came to be.

How did Trae Young meet his fiance Shelby Miller?

Young and Shelby met all the way back during his college days. He was the star athlete for The University of Oklahoma and his fiance on the other hand was on the college cheerleading team, she was also Young’s senior by 3 years. The two of them started dating back in college and have been together ever since. Now, that they have been together for 5 years and engaged for almost a year, fans have been wondering about Young’s marriage plans.

Trae says that he will get married in the summer of 2023. Much like he is to his fiance, Young has been loyal to the Atlanta Hawks. Within just 4 years of his arrival, he has led his team to a conference finals appearance. Needless to say, he has solidified himself as a superstar.

Trae Young got his wish with Dejounte Murray arriving to the Hawks in a trade with the Spurs. pic.twitter.com/AdwVnbSNtY

The Hawks team is exciting to watch and If they can make the right moves, then a core of Trae Young, Dejounte Murray, and Clint Capela can surely do great things for the franchise. We’re excited to see what the Hawks will have in store for us this season.