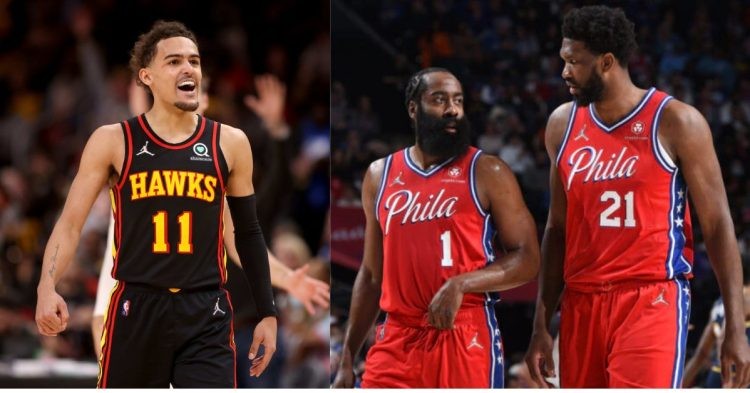 Trae Young and the Atlanta Hawks have gotten off to a good start this NBA season. They are looking to improve their record of 8 wins and 4 losses by defeating the Philadelphia 76ers tonight. The 76ers are off to a slow start and hold a record of 5 wins and 7 losses.

The Hawks have managed to do well despite their star point guard Trae missing a game against the Milwaukee Bucks. Nonetheless, they still won thanks to Dejounte Murray and the rest of the squad. They look to prove that they are legitimate contenders in the Eastern Conference.

On the other hand, James Harden and Joel Embiid have not been completely healthy and are yet to get on a roll. Considering that both these teams just faced each other for their last game, we should wonder what the rosters will look like and who is expected to come out on top.

It looks like Trae is back, he played in the last game against the 76ers. In it, he scored 26 points, 7 assists, and 7 rebounds. By doing so, he led his team to the win with a final score of 104-95. He will be looking to play even better in this next game.

For the 76ers, James Harden is not expected to play. Joel Embiid played in the last game and score 26 points, 13 rebounds, and 2 assists. At the end of the day, it will come down to the players who are on the court to support the two main stars, Young and Embiid. Here are the injury reports and expected rosters for both sides.

Now that we know the expected rosters, let us take a look at the expert predictions and picks for the Hawks vs 76ers game.

The Hawks are already proving themselves to be dark horse contenders in the Eastern Conference. However, it is too soon to declare so with certainty. They already beat the 76ers in their last match. As we all know, Harden did not play in that game and is expected to miss this one.

76ers’ James Harden to miss a month due to foot injury: report https://t.co/wplvdEEHVu

The Philadelphia 76ers are likely to fall to the Hawks unless both Harden and Embiid are don’t the court and are healthy. Since James will be absent in this game, we are siding with Atlanta who will be looking to win back-to-back games over the 76ers.