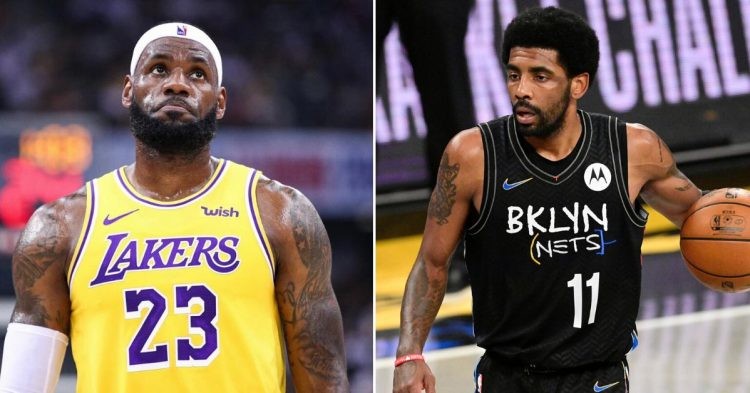 LeBron James never entertains media gossip or statements made about him publically or otherwise. However, in a recent interview, he finally acknowledged the shocking comments made by Kyrie Irving in October. The Brooklyn Nets superstars Kevin Durant and Kyrie Irving have had some time to themselves during the NBA bubble due to injuries. Even before sporting the Nets jersey on the court together, they are defending each other in the media and already consider each other the ‘best teammate’ they’ve ever had.

One such incident happened in October this year on Kevin Durant’s podcast. Kyrie Irving stated, “This is the first time in my career where I could look down and be like, ‘That mother f—er can make that shot too, and he’d probably do it a lot easier”. Kevin Durant went so far as to compare Kyrie Irving to Allen Iverson and declare him more skilled than a player who gave Kobe’s LA Lakers a hard time in 2001.

Whether or not this bromance lasts once the season begins and just like the Cleaveland Cavaliers Kevin Durant grabs all the attention is a big question. Kyrie Irving won his first championship with LeBron James in a historic manner. In addition, he took the game-winning shot in the final few seconds of the NBA finals Game 7 to give Cavs a sufficient lead to defeat defending champions and long time rivals Golden State Warriors.

Despite being through so much, 5 years later Kyrie Irving is entirely dismissive of LeBron’s efforts and his greatness. While it’s true that LeBron James overshadowed Kyrie Irving on multiple occasions which can be taxing at times. It finally led to Irving requesting a trade in 2017. However, Kyrie failed miserably in this leadership quest with the Boston Celtics.

Although a late response, LeBron James gave a befitting reply to this seemingly unnecessary comment Kyrie Irving made. In a conversation with Richard Jefferson on his podcast, he stated how taken aback he was when he read the whole transcript of Kevin Durant’s podcast.

“So when I heard the comment that Kyrie made, I wanted to find the whole transcript. I was a little like ‘damn’ once I got the whole transcript you know I wasn’t like ‘aw.. you trippin’ or ‘game winning shots my whole life’ I was not like that. I was like ‘damn’ because you were there for a couple seasons, Kyrie was there for three seasons and the whole time I wanted to see him be the MVP of our league, I only cared about his success and it just didn’t align and we were able to win a championship but I only cared about his wellbeing on and off the court.”

Even though LeBron was mindful of Kyrie’s contribution to the historic 2016 championship, the media is the true culprit. Kyrie Irving, who claims he doesn’t care what the media writes about him or what people think about, they were the driving force that led him to depart from the cavaliers when they needed him the most. It was the media’s obsession with LeBron that made him feel overshadowed.

However, saying Kevin Durant is the only reliable teammate he’s had is below the belt. Durant himself believes LeBron James is the best player in the league.

Brooklyn Nets and LA Lakers are heavily favoured in their respective conferences to reach the NBA finals. LeBron James now has an understanding and less childlike teammate in Anthony Davis and they are very well capable of defending their championship against Kevin Durant and Kyrie Irving.

What is Tony Ferguson’s Net Worth?