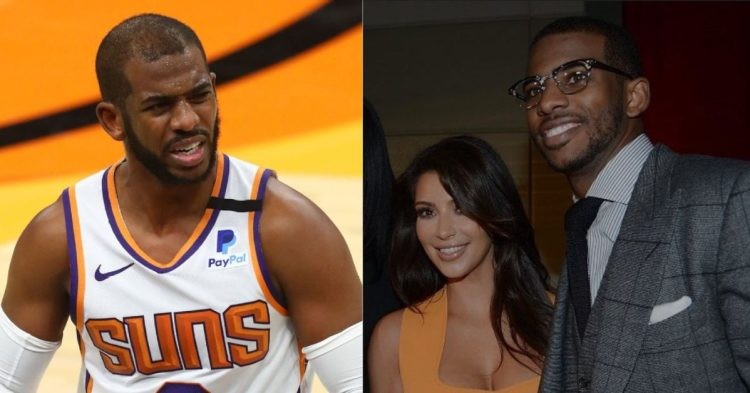 Chris Paul with Kim Kardashian and on the court (Credit: Twitter)

NBA fans are not being too kind towards Phoneix Suns star Chris Paul at the moment. Some of us might already be aware that Kanye West recently accused CP3 of engaging in an extramarital affair with Kim Kardashian. This news was followed by a plethora of reactions, primarily from social media and the internet.

Not many basketball fans will be aware of the Kardashian Curse and what it entails. Considering that the Kardashians are famous, at least in the United States, we should be knowing more about this curse. Especially, if it has the potential to explain something bizarre about Chris Paul’s NBA career so far.

To those who are interested, the Kardashian curse is simply a notion of bad luck that seems to follow any and all men closely connected to the Kardashian women. That peculiar bad luck can be manifested in any form. Usually some type of lack of success or mental disorder.

So that’s why Chris Paul never got a ring? 😭 bro had the kardashian curse all along

This might seem bizarre to hear. However, there is certainly enough proof that the Kardashian curse might be legitimate. Scot Disk and former NBA player Lamar Odom were married to Kardashian women. However, both their marriages failed and they ended up having substance issues.

Mfs wondered why CP0 always came short to winning a ring or choking leads, he’s had that Kardashian curse linger around him pic.twitter.com/pmjigse85q

Let’s not forget about Kim’s former husband Kanye West. He is probably the best example of someone with the Kardashian curse and was even diagnosed with Bipolar disorder.

So that’s why Chris Paul has never won a ring. That Kardashian curse is real pic.twitter.com/QAB3S8G9zR

Coming back to the issue at hand, Chris Paul has never won an NBA title in his life. Moreover, when he finally managed to make it there in 2021, he ended up losing to Giannis Antetokounmpo and the Milwaukee Bucks. Therefore, fans are now assuming that he was infected with the Kardashian curse all along, “It was the Kardashian Curse this whole time.”

IT WAS THE KARDASHIAN CURSE THIS WHOLE TIME LMAOOOOOOOOOOOOOO pic.twitter.com/Gz8qandM2s

This might be quite a stretch. However, we should remind people that CP3 has blown 5 series’ where his team had a 2-0 lead. Year after year, a story of falling short and bad luck is consistent with his career. Thus, it really wouldn’t be that inaccurate to claim that his alleged affair with Kim has followed him for many years.

IT ALL MAKES SENSE NOW THE KARDASHIAN CURSE IS REAL pic.twitter.com/UkW4OSRfgY

Chris Paul blowing 5, 2-0 leads makes so much sense now since he got with Kim Kardashian and has the Kardashian curse 😭

So it was the Kardashian Curse on Chris Paul this entire time pic.twitter.com/ZhsECzqjP9

Perhaps, if Chris Paul managed to finally win a ring in the near future, it would convince these fans that he never really had an affair with Kim Kardashian.