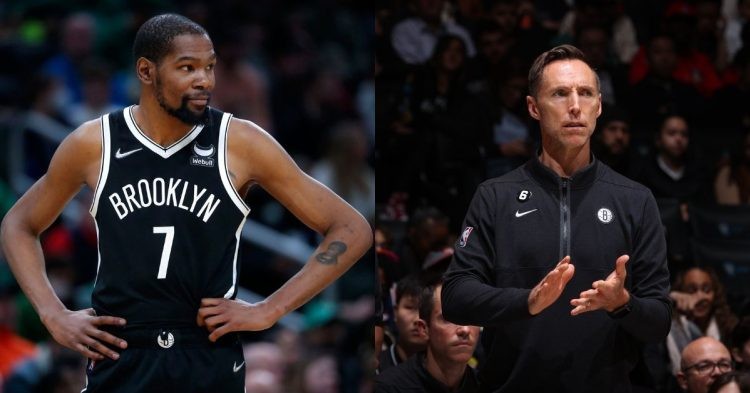 The Brooklyn Nets are currently the hottest topic on the internet right now. They have caught the headlines once again after firing the head coach Steve Nash yesterday. The Nets have a record of 2-6 in the 2022-23 NBA season right now and it seems like Joe Tsai wanted a new head coach to lead the Nets team. Amid this, Kevin Durant has reacted to Nash’s sacking.

During the post-game interview, Durant said, “I woke up from a nap and turned to my right and saw it on ESPN. I was shocked. You’re always shocked when a move like this happens, but it’s normal in the NBA. It’s about getting ready for the game tonight so it’s a quick turnaround always in the league, especially during the season, you got practice games coming up so you can’t think too much about it but it was on the mind for a little bit today.”

I’m shocked that KD is shocked 😲

It seems like fans don’t believe that Nash’s departure surprised him. A fan commented under the video, “It’s funny Kevin Durant acting surprised that Nash was fired. He literally attempted to get him fired this summer.”

Did Kevin Durant have a role to play in Steve Nash’s firing?

During the summer, the Nets organization was in the middle of a rumor fest regarding Durant and Kyrie Irving. KD even provided Nets owner Joe Tsai with an ultimatum. The American wanted Tsai to decide if he wanted to keep him and fire Steve Nash and Sean Marks. Durant expressed to the Nets board that it will be the only way he stays in Brooklyn.

However, Tsai ended up hinting that he was taking Nash and Marks’ side and that opened up the possibility of KD leaving in the summer. To bury those rumors, they publicly announced that all concerned parties will be looking to build for the future together.

As Durant revealed Nash’s sacking shocked him, fans believed it was all an act.

Durant wasn’t shocked, he wanted the Nets to fire Nash before he committed to coming back. That’s all a show for the cameras.

he’s the main one who wanted him gone wym “shocked”

Lol that’s not even a good cover story who tf takes a nap at 1:15

KD let’s not forget you wanted that man fired few months ago. So what’s your surprise about?

It seems like the NBA world isn’t buying Durant’s reaction to the news. The main reason for that would be the fact that he wanted Joe Tsai to fire Nash. With that said, Durant would be looking to turn the season around now that the Nets have already lost 6 games this season. It may be a huge obstacle to overcome for the franchise. But with Kyrie and Ben Simmons on the same team as him, KD has all the talent in the world with him.