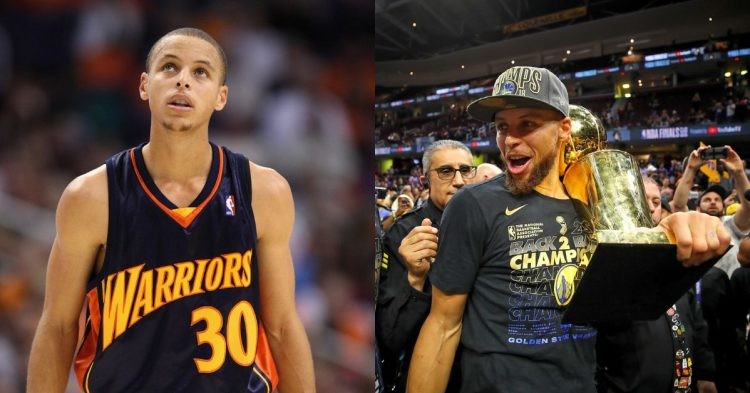 Stephen Curry and his revolutionizing three-point shooting have been around the NBA for a while now. He has been in the league for 13 years now and can be considered a veteran. Alongside Klay Thompson and Draymond Green, he turned the Warriors into a competitive dynasty. Moreover, he is one of the most accomplished NBA players we have ever seen.

Golden State Warriors fans will remember Steph joined the NBA in the 2009 draft. However, not many of them know Steph made a vow to the franchise during his first year there. We should wonder what this vow could be about and whether the baby-faced assassin was successful in keeping his word to his team.

This is quite a heartwarming story. NBA fans remember the success that GSW is currently enjoying. Be that as it may, they struggled for several years in order to become a contending team in the Western Conference and make it deep into the NBA playoffs.

To make matters worse, Steph was severely injury-prone during his early years in the league. Especially in his ankles. He has revealed on numerous occasions how these injuries affected him and how he changed his training and playstyle to deal with these problems.

Nonetheless, it was very difficult for the Golden State Warriors to get anything going in Steph’s first year there. The team managed to win only 29 games and had 53 losses. Therefore, they became the 10th seed and did not even qualify for the NBA postseason.

This greatly upset Curry at the time who must have known his team still had a long way to go before coming contenders. He sent a message to the Warriors back then. It is now considered one of the greatest tweets in NBA history.

“Promise to all the Warrior fans… We will figure this thing out. If it’s the last thing we do we will figure it out.”

The greatest tweet in the world of sports 🐐 pic.twitter.com/7yoOrQmGaw

At the time, there was definitely no guarantee that Golden State would ever figure things out. Yet, a young Steph boldly promised this to his team in his first year there. It is impossible to argue that he didn’t figure it out. The Warriors fan base is lucky to have such a determined and strong-willed player.