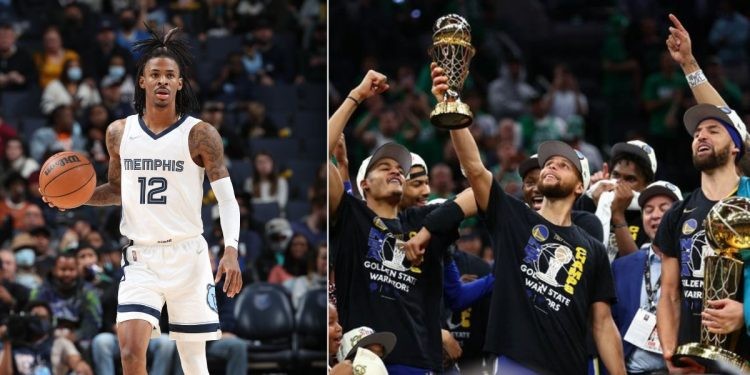 Stephen Curry and the Golden State Warriors have won the 2022 NBA championship. They eliminated Ja Morant and the Memphis Grizzlies in the second round of the western conference playoffs. This is a fitting “tit for tat” scenario as the Grizzlies dealt with the Warriors their postseason exit last year in the NBA play-in tournament.

Ja had an incredible season and earned the respect of players across several teams in the league. Therefore, he chose to shower Curry with rich praise for his performance in the NBA Finals. The Memphis star sent out a tweet sharing Steph’s achievements along with the caption, “top 5 all time.”

The most common debate in the basketball world always seems to focus on “who is the best player?“, “Is this player better than that one” or ” who are the top players to ever play basketball“? These are very easy questions for the average fan to type into his search engine. However, in reality, the gap between elite athletes is a very complicated question. Therefore, it is difficult to have an accurate top 10 player of all time.

Those 8 players are usually followed by Tim Duncan, Hakeem Olajuwon, and Bill Russel. Therefore, Curry entering this list would mean one of these players, who are all much larger than him would be removed or ranked lower. This is something critics did not let happen for years.

Steph now has a barrage of accolades to shoot at critics, just like his three-pointers. He is now a 4X champion, 2X regular-season MVP, and now has a finals MVP. Moreover, he also has scoring titles and all-star game MVPs along with many other accolades. He has been the cornerstone of a basketball dynasty in the modern generation. We have not seen one since perhaps the Lakers or Spurs.

Ja, who went toe to toe with Curry, knows the impact his opponent had in eliminating the Grizzlies this NBA postseason. Therefore, him showering Steph with this level of praise speaks to the impact Curry has had on the league and perhaps even the world.

On the topic of whether Curry is actually top 5?. That is a question only the future generations will truly be able to answer.