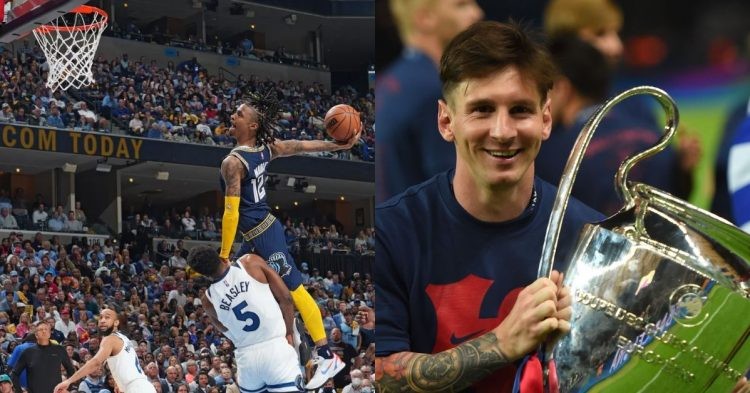 Ja Morant could be regarded as one of, if not, the best young player in the NBA. He’s 22 years old and has already achieved more in his career than people do in decades. Last season was one of his best, individually and as a team. This is why his morale is at an all-time high and why he’s calling out Lionel Messi on a 1v1.

Ja Morant has been compared to Derrick Rose and Russell Westbrook ever since he was drafted. His athleticism was what attracted the Grizzlies in the first place draft him in the first place. However, with players like this, longevity is a problem. Ja Morant seems to be fit as a fiddle at the moment and was playing at an elite level. But the hope is that he can continue this long-term as well.

Seeing stars from different sports mingle or hang out with each other is nothing new. Sometimes we might see some back-and-forth and challenges that amount to nothing. Like the LeBron James and Tom Brady Ice hockey match. However, these challenges usually have some basis of friendship or interaction to prompt these.

Lionel Messi is regarded as the greatest footballer of all time. His single-game records and titles won are enough to speak for his greatness. But he’s a predominantly Spanish-speaking man that loves to keep himself near the sport and his family. It’s safe to assume Ja Morant and Messi do not have a long-standing relationship.

Ja Morant is the reigning Most Improved player and had a great season with Memphis. But to believe you could beat the best player of all time in a sport you’re weak at and in a position deemed ‘the hardest in the world’ seems a lot more farfetched. Maybe Ja’s athleticism and height will help him, but everyone would still all their life savings on Lionel Messi to win.