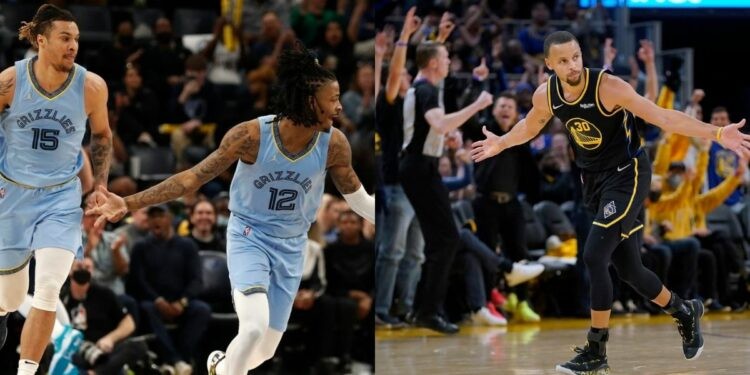 Ja Morant and the Memphis Grizzlies were eliminated in the second round of the Western Conference. This was at the hands of Stephen Curry and the Golden State Warriors. The experience of the Warriors proved to be too much for the Grizzlies as they fell in 6 games.

Kendrick Perkins is a former NBA player and now an analyst. Additionally, he won an NBA championship with the Boston Celtics in 2008. Big-Perk sent out a tweet questioning the legitimacy of the Golden State Warriors’ trip to the NBA Final.

Ja Morant was the best player on the Court during the GSW- Memphis series. This fact is almost undisputed. He did not play past game 3 and was sidelined for the series.

You luck Ja got hurt

Perkins believes the Golden State Warriors were lucky that Ja Morant was hurt. He might just be telling the truth. Morant scored 34 points in games 1 and 3 of this series. Additionally, he had a monster 47 point night in game 2.

No other player came close to scoring this much in the series. However, Morant was diagnosed with a  bruised knee after game 3. It seemed to have happened during a play with Jordan Poole.

The Grizzlies may have done well without Ja in the regular season. However, they quickly fell into a 3-1 deficit. They managed to rally back and win game 5 at home. They ended up losing game 6.

Perkins may be right to some extent. Morant getting injured titled the series flow. However, this does not mean the Grizzlies would have advanced with Ja on the court.

Jordan Poole, Draymond Green, and Klay Thompson are simply a better supporting cast than Banes, Brooks, and the players in Memphis. Therefore, the Warriors were the better, more star-studded team and would have won this anyways. Finally, there is another reason Perk is saying what he’s saying.

Kendrick Perkins had picked the Grizzlies to win the Western Conference. However, this may have been impulsive, considering they had not made it past 1 postseason win( Game 1 vs Utah Jazz 2021) at the time he predicted it.

In all honesty, this is probably just Perk’s way of coping.