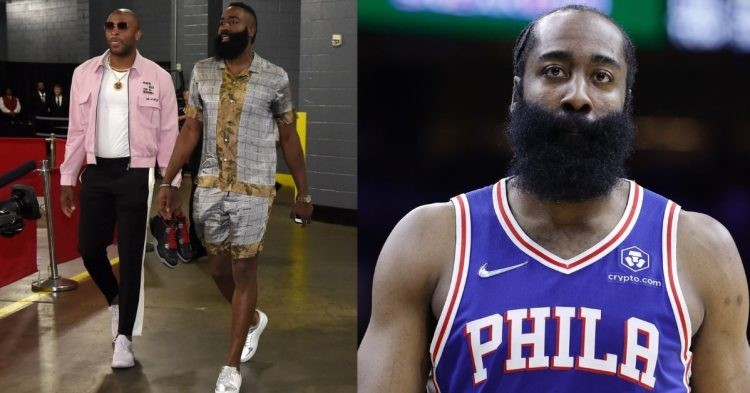 James Harden, Joel Embiid, and the Philadelphia 76ers had a disappointing NBA postseason. They were eliminated by Jimmy Butler and the Miami Heat.

Embiid was injured for much of this series, yet most of the blame fell on Harden for his poor and inefficient play in that series. It seemed he had opted out of the final year of his contract for precisely that reason.

Rumors have emerged of a new contract that might be signed by Harden. His taking a pay cut and restructuring his contract speaks to how badly he wants to win. The reports indicate that he would mostly be pursuing a contract for around the next 3 years worth roughly $109 million.

It wasn’t too long ago that Harden was the most paid player in the NBA. This occurred during his dominant stretch with the Houston Rockets. Therefore, one could feel that he has made all the money he wants to. Definitely, more than he knows what to do with. The only thing left to do is win an NBA title.

This is something Harden is yet to achieve in this late stage of his career. Moreover, he is unlikely to force his way out of the 76ers and look to be competitive for a title somewhere else. Therefore, it is entirely possible he accepts this mid-tier deal of $109 mil for 3 years.

This gives the #Sixers cap space flexibility to improve the roster this season and seasons to come. James had stated he will do whatever it takes to win. #PhilaUnite pic.twitter.com/dVdE3iqkYV

This would also allow his team to remain competitive. They would also be able to pursue free agents to put players around Harden and Embiid. This would increase their chances of winning dramatically, as opposed to giving Harden “the whole house”.

Negotiations are still ongoing between James’ side and the 76ers. It is still unclear at the moment what exact numbers they are willing to settle on. Harden does not seem to care though. He was seen partying and having the time of his life with Embiid, and now new teammate PJ Tucker.

“The contract negotiations between the Sixers and James Harden are going well, per a “source” with knowledge of the negotiations.” https://t.co/BlEE0NtXXj

This could bring doubts and issues about his conditioning. However, another more positive way to look at this is the fact that Harden is already showing to have chemistry with his new team.