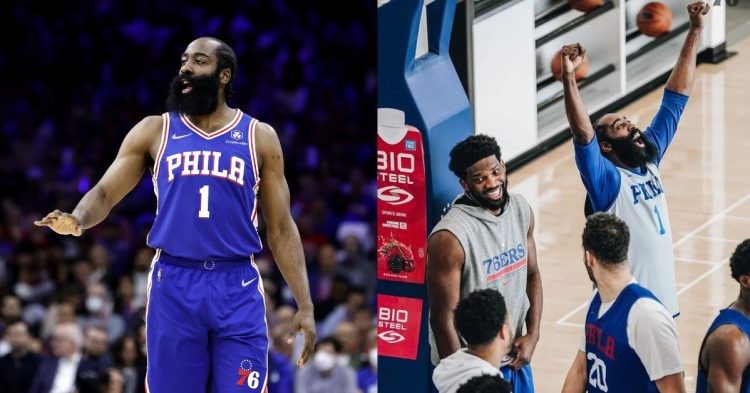 The Philadelphia 76ers recently completed a decent run in which they placed fourth in the Eastern Conference table. James Harden, Tyrese Maxey, and Joel Embiid were their notable performers in the 2021-22 season. Despite having a delayed season debut, Harden was still able to have an effect.

The 32-year-old averaged 21 points, 10.5 assists, and 7.1 rebounds per game this season. These numbers are quite impressive for a player that missed most of the season. The American only managed to play in 21 games this year for the 76ers. He had to miss a large number of games due to a hamstring injury.

James Harden had refused his $47m player option and chose to go for free agency, according to Shams Charania. This is in fact something that we all saw coming. Earlier this month, it was reported that The Beard wanted to commit to Philly but only on a short-term deal.

Philadelphia 76ers star James Harden is declining his $47.4 million player option for the 2022-23 season and intends to return on a contract in free agency that gives the team financial flexibility to bolster the roster, sources tell @TheAthletic @Stadium.

Together with that, sources also mentioned that the 76ers were also looking to land him only for the time being. The main reason for this would be his age. He’ll be turning 33 in August, which will mean he will only have a few years left in the tank.

If James Harden chose to accept his contract, he would have earned $47.4 for the 2022-23 NBA season. He would be only behind Stephen Curry and would have been known as the second-highest paid NBA athlete. That’s a huge factor in suggesting that Harden’s ambitions are bigger than just earning money. James’ selfless act has helped the Sixers to free up the roster and will help them to build a better team.

ESPN Sources: 76ers star James Harden has declined his $47.3M option and become a free agent. He keeps real the possibility of negotiating a new deal that would deliver the Sixers roster-building flexibility in free agency – including use of the full $10.5M exception.

Earlier, reports claimed that he was willing to take less than his maximum salary. The reason for this would be so that the 76ers can build a team that can go for the championship. If they chose to pay him every bit of money they had, the hopes of an NBA title would have diminished. Harden knew to win against the best, you need to have the best.